Werner Herzog in person! With his unique vision of nature and man, Herzog constructs the story of a man who lived with grizzlies for 13 summers before his tragic death.

For 13 summers, failed actor-turned-animal activist Timothy Treadwell filmed his encounters with Alaskan grizzly bears—until one of them killed him and his girlfriend in 2003. That seemingly inevitable fate informs every minute of Herzog's riveting combination of Treadwell's footage with his own expert filmmaking and unique vision of nature and man. Grizzly Man could easily have been sensational and exploitative, but in the hands of Werner Herzog, it becomes something extraordinary. D: Werner Herzog, US, 2005, 103m. Discussion follows. 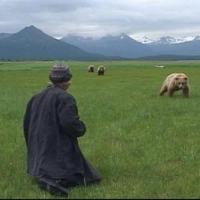