Lessons Learned in Ferguson and Their Implications for the Country

Rev. Wilson was recently selected by Missouri Governor, Jeremiah Nixon, to co-chair the Ferguson Commission, created to study and make specific recommendations for how to make progress on the issues raised by events in Ferguson. In other community leadership, Wilson serves boards for the United Church of Christ Cornerstone Fund, YMCA of Greater St. Louis, FOCUS-St. Louis, Teach for America-St. Louis and the Mayor's Commission on Children, Youth and Families, where he co-chaired the Regional Youth Violence Prevention Task Force. He is a member of the governing council for Washington University's Institute for Clinical and Translational Sciences and the Professional Advisory Council for the Brown School of Social Work. Under his leadership, the Urban League Young Professionals established St. Louis' Young Blacks Give Back initiative, which has provided thousands of community service hours to local non-profits over the last 12 years. 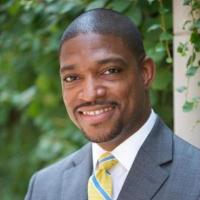