The lecture deals with theways of producing otherness with help of gender discourse in international relations. 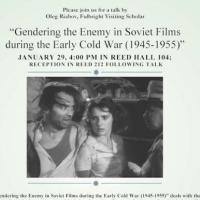 Gendering the Enemy in Soviet Films during the Early Cold War (1945-1955)” deals with the
ways of producing otherness with help of gender discourse in international relations. He
investigates cinematic representations of Soviet and American masculinities, femininities,
families, and gender relations as a part of struggle for hearts and minds in international and
domestic politics, which were exploited in creating external and internal enemies, in
legitimating power, and in shaping gender orders in the USA and the USSR. His analysis
includes films, film periodicals, and posters.
Oleg Riabov is Professor in the Philosophy Department and director of the Center for Ethnic
and Nationalism Studies at Ivanovo State University, Russia, and a Fulbright Visiting Scholar
at the University of Vermont (August 2014 – February 2015).

Reception in Reed 212 following the lecture.

Sponsored by the Russian Department. For more information contact Andrew Chapman at
Andrew.H.Chapman@Dartmouth.edu