The Brutal Causes and Devastating Consequences of Europe’s Refugee Crisis

Driven by the civil war in Syria and a host of other conflicts, refugees are flooding into Europe in greater numbers than at any time since World War II.  The turmoil has created an extraordinary humanitarian crisis and  opened deep divides between European partners and between the European Union and its neighbors.  To provide in-depth insights into the crisis, Dartmouth’s Office of the Provost, Dean of the College, Leslie Center for the Humanities, and John Sloan Dickey Center for International Understanding present a panel discussion with Bob Kitchen, Director of Emergency Response and Preparedness for the International Rescue Committee, Professor Graziella Parati, Director of the Leslie Center of the Humanities and a scholar who focuses on migrants, and Sir Michael Leigh, former Director General of the European Union for Enlargement.

Free and open to all

Read the Dartmouth Now article on the event. 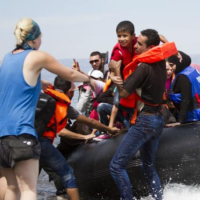