On April 24, Emmanuel Macron became the first president in two decades to be re-elected, winning 58% of the vote against Marine Le Pen’s 41%. What does this election tell us about France today? What effect is it likely to have on France's relationships with Europe, the United States, or the world? Henry Clark (Political Economy Project) will offer a few thoughts and host a Q&A on these questions. 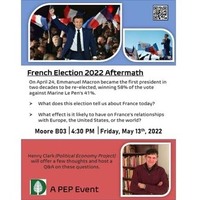