Poems in the Voice of Lava: Iron Songs, Ore Choirs, and the Core’s Sly Music

A book talk with Katy Didden, author of "Ore Choir: The Lava on Iceland" and "The Glacier’s Wake."

Ore Choir: The Lava on Iceland is a collection of poems that artistically explore lava about the terrifying beauty and power of lava, and delves into the inner self as much as the impact of climate change on the world around us.

Part miracle, part oracle, in these poems lava speaks “with the focus of a burning glass,” lighting lyric core samples through geo-historical and cultural texts about Iceland. Shifting the ground so “nouns are never still,” the lava reveals how language itself is a record of collisions: poem as matter, sound as forge, form as friction. And what does it mean to be human in the face of such ancient forces, especially as climate change unsettles the earth that anchors us? By the light of the “sphere’s credo,” can we, too, be remade?

Katy Didden is the author of Ore Choir: The Lava on Iceland (Tupelo Press, 2022), and The Glacier’s Wake (Pleiades Press, 2013). Her poems, essays, and reviews appear in journals such as Public Books, Poetry Northwest, Ecotone, Diagram, The Kenyon Review, Image, 32 Poems, The Spoon River Poetry Review, The Sewanee Review, and Poetry.  She has received fellowships and residencies from The Bread Loaf Writers’ Conference, Sewanee Writers’ Conference, the Virginia Center for Creative Arts, the Hambidge Center, MacDowell, and the Listhús Residency in Ólafsfjörður, Iceland. She was also a 2013-2014 Hodder Fellow at Princeton University. Collaborating with members of the Banff Research in Culture’s Beyond Anthropocene Residency, she co-created Almanac for the Beyond (Tropic Editions, 2019). Her work has been featured on Verse Daily and Poetry Daily. Katy is an Associate Professor of English and Creative Writing at Ball State University. www.katydidden.com

Sponsored by the Institute of Arctic Studies at the John Sloan Dickey Center for International Understanding and the Environmental Humanities Initiative, Dartmouth College. Book signing hosted by Still North Books and Bar of Hanover. 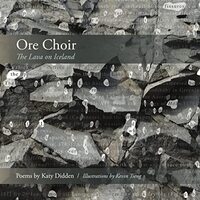