Dartmouth Students Are More than Halfway to $100,000 Fundraising Goal for Haiti Relief

1/18/2010
Body
Thanks to rapid mobilization, Dartmouth College students have raised nearly $59,000 toward a $100,000 goal for Haitian relief efforts. The donations will go to Partners in Health (PIH), a humanitarian relief organization co-founded by Dartmouth President Jim Yong Kim. The leaders of Students at Dartmouth for Haiti Relief (SDHR) have also organized more than 300 campus and community volunteers into various committees. Their work is now setting the standard for colleges and universities nationwide.

“When we heard about the earthquake we obviously knew about President Kim’s connection to Haiti and the work he did there with Partners in Health,” says student body president Frances Vernon ’10, who formed SDHR with Maura Cass ’10 and Alexandra Schindler ’10. “And we are all so inspired by our Dartmouth president and the vision he’s brought to our College that students really want to step up. This is a testament to what former president John Sloan Dickey said many years ago. We are making the world’s troubles our own.” 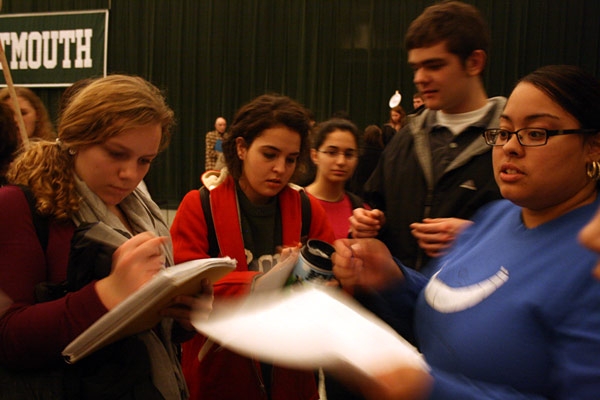 After staying up all night last Tuesday to diagram their plans, they solicited student leaders to serve as heads of eight committees. They rolled out their plan at a student rally on Sunday attended by more than 300 students, faculty, and staff. Vernon was then contacted by student leaders at other institutions, eager to emulate Dartmouth’s quick response. So the SDHR shared its organizational chart on YouTube, and posted related videos.

Working with student body presidents of peer institutions, SDHR also organized a collegiate fundraising challenge through Stanford’s website, which Dartmouth is leading by a wide margin. And as reported on PIH’s Personal Fundraising website, Dartmouth Haiti Response has currently raised the most money and ranks third in number of contributions. 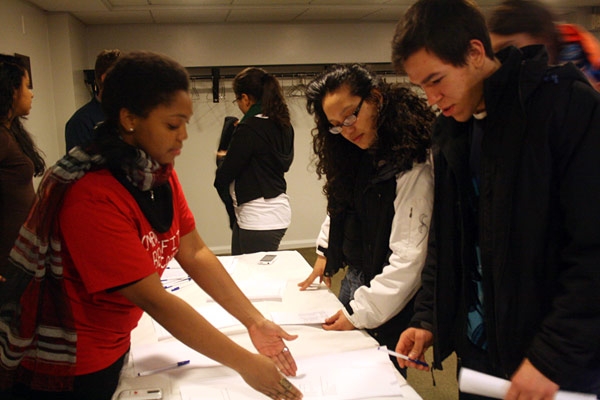 The group is also developing a long-term educational effort to explain the need for political, structural and economic change in Haiti. “Our Dartmouth team is already in discussion with young leaders around the country to develop a national educational plan,” says Vernon, a native of Cedar Rapids, Iowa, who designed her own major in Globalization, Health, and Development with a focus in Latin America. “It’s crucial to understand what is at stake and how we can continue to help.”

“I am so proud to see what our students are achieving through compassion, intellect, and hard work,” President Kim wrote in a January 19 letter to the Dartmouth community. “Their vision is a model for students at other colleges and universities.”

Upcoming student-organized fundraisers at Dartmouth include Haiti Up-Lifted: Community Awareness and Fundraising Dinner on January 23 at 6:30 p.m. in Collis Commonground. The event will feature music, remarks, and a silent auction of Haitian art. Suggested donations are $5 for students and $20 for community members. On Sunday, January 31, the SDHR presents Compàs: The Haiti Relief Benefit. The concert of Haitian music and student performances will be held at 1:30 p.m. in Spaulding Auditorium, Hopkins Center for the Performing Arts. Tickets are $10 for students and $20 for community members.

“We’re living up to our reputation for being the most active Ivy League school for social justice and service,” says Los Angeles native RuDee Lipscomb ’08, benefit concert chair and creative producer. Lipscomb’s mother had been working on medical relief efforts in Haiti until shortly before the earthquake. “This tragedy really hit home for me,” she says.