A New Method of Quantitative Art Authentication from Dartmouth Researchers

Dartmouth researchers Daniel Graham, James M. Hughes, and Dan Rockmore are combining their expertise in brain science, computer science, and mathematics to analyze a series of drawings from the 16th century by Pieter Bruegel the Elder. With their net skills, they’ve developed a way to analyze mathematically a drawing and quantify its artistic style. With this tool, works can be compared to help discriminate between authentic and imitation artwork. 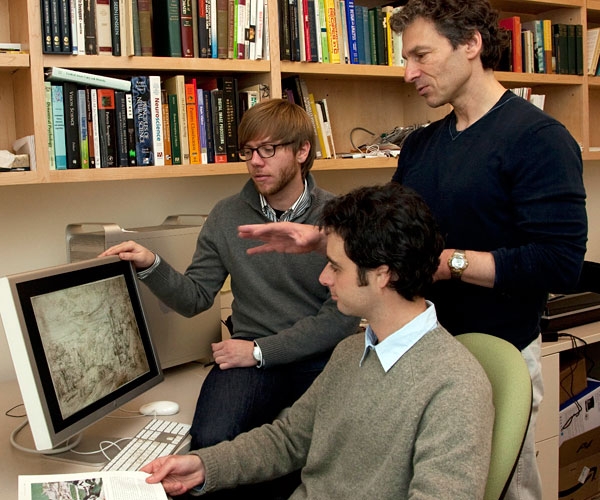 James Hughes (left, wearing glasses) talks about the works of Bruegel with Dan Rockmore (in black) and Daniel Graham. (photo by Joseph Mehling ’69)

Their study appeared in the early online edition of the Proceedings of the National Academy of Sciences on Jan. 5, 2010.

“This work sits at the convergence of vision science, computer science, and applied mathematics,” said Graham, a postdoctoral fellow in the mathematics department at Dartmouth. “My background is in the study of the human visual system, and specifically about what artwork can tell us about how humans perceive the world. Since art is a vastly simplified representation of the visual world — it’s a 2-dimensional thing while the real world is 3-D — the assumption is that artists through the ages have captured the minimum features needed to generate perceptions that approximate the visual world, and therefore my work tries to characterize the wealth of regular structure in such images.”

Graham was naturally drawn to working with Rockmore, a professor of mathematics and of computer science and the chair of the mathematics department at Dartmouth. Rockmore has been working on analyzing art through mathematics for nearly 6 years. Hughes, a computer science graduate student, whose interests in art and modeling the visual system led him to join this interdisciplinary collaboration, which continues beyond this project.

The researchers explain that their method focused on modeling the way images, in this case the Bruegels, interact with the first stages of visual processing. They used an existing model of vision coding that has shown great success in advancing understanding of visual processing and adapted it for use in this work. The “sparse coding” method can be likened to finding the individual sounds in musical chords.

“Take the analogy of a piano chord, which is made of many sounds,” said Rockmore. “Sparse coding, in essence, provides a technique for uncovering the keyboard – a particular tuning – that represents a musical phrase from an artist’s body of work using the fewest number of keys. That’s what we did with the drawings.”

Hughes added, “I think the strength of our result was surprising, as we were able to consistently outperform other well known methods. Sparse coding is adaptive, unlike other approaches that make fixed assumptions about the way in which images are decomposed according to the model at hand. We’re still investigating the limits of an adaptive approach like sparse coding, but it seems to have particular representational power and we’ll be exploring whether this method works with different artists and different types of art.”

All three researchers stress that their method is just one authentication tool. “Our model is purely quantitative and data driven, and does not take into account the vast experience of connoisseurs,” said Graham. “Our work is complementary to the judgment of connoisseurs, and to physical methods of authentication, like chemical signatures and analysis of canvas weaving. It is also complementary to what is considered the gold standard of attribution, namely chain-of-custody records. We see our method as another form of evidence, which can be weighed against traditional forms of evidence, and it has the distinct advantage of being rigorously objective.”