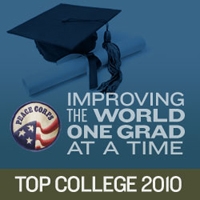 “For nearly 50 years, enthusiastic college alumni have contributed to the success of Peace Corps programs and our mission to promote world peace and friendship in host communities around the world,” said Peace Corps Director Aaron S. Williams. “Peace Corps service is a life changing leadership opportunity and a great career foundation in almost every field, ranging from international development, education, public health, engineering, agriculture, and law, to name a few. I am proud of our historic relationship with over 3,000 colleges and universities in the United States and look forward to recruiting and training the next generation of Peace Corps volunteers.”

Currently, there are 7,671 Peace Corps volunteers serving in 76 host countries around the world. A college degree is not mandatory for service. Relevant experience in areas such as education, health, business, IT, environment, and agriculture, however, is required. In 2009, Peace Corps received over 15,000 applications, an 18 percent increase over 2008. This is the largest number of applications since the agency began electronically recording them in 1998.

In 2009, New Hampshire was among the nation’s top Peace Corps volunteer-producing states per capita, ranked as No. 15 nationwide. Forty-six (46) currently serving volunteers are from New Hampshire and 1,532 Granite State residents have served since 1961.

The Peace Corps provides both tangible benefits and a life-defining leadership experience. Peace Corps volunteers return from service as global citizens and receive support from the Peace Corps in the form of career services, graduate school opportunities, advantages in federal employment, readjustment allowances, and loan deferment and cancellation opportunities.