Many students come to Dartmouth hoping that the College will lead them toward discovering their life’s work. Jonathan Sigworth ’12, of Hamden, Conn., transferred to Dartmouth last fall because the College best allowed him to further continue the work he had already started. 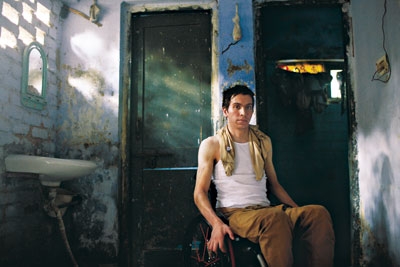 New direction: During a gap year program in India in 2006, Sigworth became a quadriplegic when he fell from a 70-foot cliff while mountain biking. He returned to India one year later to visit friends and undergo therapy, but instead ended up peer mentoring the other patients.

“We had no clue how different the rehab situation would be than in the states,” he says. “We saw all these people with the same capability as me, the same level of paralysis, and they were doing nothing!” Sigworth set to work showing them everything he had learned about maneuvering as a level C-5/C-6 quadriplegic, with full paralysis from the chest down and limited use of his hands.

Sigworth has returned to India every year since his accident, establishing a wheelchair rugby program at the Indian Spinal Injuries Centre in Delhi in 2008, and filming a documentary, More Than Walking, in early 2009. Unofficially, he calls his work Empowering Spinal Cord Injured Persons (ESCIP).

Opportunity: After learning from his brother Nathan, Class of 2007, about Dartmouth’s strengths in international programs and the flexibility of the D-Plan, Sigworth decided to transfer from Wesleyan University last year. Dartmouth, he felt, would give him the opportunity to continue his efforts in India alongside his studies. This winter, with support from the Class of 1961 Arts Initiative Fund, Sigworth returned to India to distribute his film as a teaching tool to rehabilitation centers across the country.

Although Sigworth has spent only one term in Hanover, he has already had an effect on the campus. Working for the Student Accessibility Services office during fall term, he gave feedback about improvements to wheelchair access on campus, evidenced by the re-paved ramp to Baker Library’s 1902 room and the installation of automated door openers on other buildings. “I wanted to not just be using the services; I wanted to help,” he says.

Sigworth still loves the outdoors and adventure. As a transfer student, he participated in Dartmouth Outing Club First-Year Trips. “Normally I would have picked the extreme hiking trip that goes to the top of Mount Moosilauke,” he says. Instead, he participated in the Nature Writing and Painting trip, during which he insists, “I discovered I enjoy painting.”

Solutions: Much of Sigworth’s time, however, is occupied with the daily routine of being a quadriplegic. For his planned major and possible teaching career in English, typing papers is one of the most significant challenges. Because he can flex his wrist but lacks finger mobility, Sigworth writes on paper by holding a pen between his knuckles. “I also type with my knuckles, and it’s not that bad, but if you try to write a research paper that way, you’re just gonna die,” he explains. His solution is to write papers out by hand and use dictation software to create a typed paper on the computer.

“When you’re struggling with a physical disability it totally just magnifies any other issues that you may have,” he says, “whether it’s time management, or you’re just disorganized. If you’re lazy it really comes across in a big way—when it takes you half an hour to get dressed in the morning and you procrastinate putting your socks on, it’ll cost you your breakfast.”