For me, the term “PE class” conjures up a terrifying image, an amalgamation of every treacherous game of dodgeball I was ever forced to play. I would cower in the back, praying not to be hit. Inevitably, I’d wind up as the last player standing on my team, facing a squadron of hefty pubescent boys. To say the least, PE was not something I looked forward to. 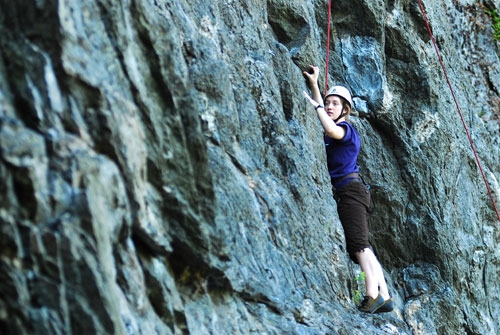 Here at Dartmouth, though, my PE class is the highlight of my week. No jumping jacks, no running laps, and certainly no dodging balls of any kind. Instead, I face an even more frightening task: scaling 80-foot rock faces. I’m taking Beginning Rock Climbing, and it’s rocking my world.

Every undergraduate at Dartmouth is required to take three physical education classes in order to graduate. Students find seemingly endless ways to fulfill this requirement (although I don’t believe there are any dodgeball options). I’ve received credit for participating in my dance group SHEBA, and I know other students who fulfilled the requirement with boxing, varsity basketball, ballroom dancing, and spinning.

The first day of Beginning Rock Climbing was spent at Winslow State Park on Mount Kearsarge, a climbing spot about 45 minutes southeast of campus. A trek through leafy, muddy woods led us to the rock.

Cody Doolan ’10, one of our climbing instructors, patiently explained harness safety, showing us how to tie the figure eight and half-fisherman’s knots that would keep us from crashing to the ground. Cody and our other instructor, Erin Larson ’11, are involved with the Dartmouth Mountaineering Club, which is part of the Dartmouth Outing Club.

Next, Cody had to set up anchors for our ropes, which meant hiking to the top of the cliff the long way, around the back. Since Erin couldn’t be there that first day, Cody needed a helper. He asked us if anyone had climbed before. I raised my hand; technically, it was true. I’d attended several rock-climbing themed birthday parties in my youth.

While the rest of the group waited at the bottom, Cody and I scrambled to the top of the rock. As Cody anchored the ropes to precarious-looking trees, I gazed out across the deciduous forests of New Hampshire, the serene stream burbling through the woods, the gentle hills in the distance.

“Okay, you ready?” Cody asked me, breaking me out of my pseudo-stoic reverie. “You’re going to rappel down.”

Rappel down? I thought to myself. Isn’t that what they do in spy movies?

It is indeed what they do in spy movies, and as I tied myself in, I scrambled to mentally prepare for the coming plunge. Ever so slowly, I approached the edge of the cliff. I can attest that gazing out over the landscape and gazing down at the ground are two very different experiences.

“You’re just going to sit back like you’re in a chair,” Cody said. “Remember, jumping is for the army. Just walk down the wall.”

I shot Cody several skeptical looks, not trusting the thin red rope or the gnarled little anchor trees or even the jovial climbing instructor in an orange shirt. But somehow I found myself at the edge, facing the cliff, leaning back into an empty nothingness. And somehow, I found myself completely supported. Cody slowly lowered me to the bottom of the cliff, and I stood once again on solid ground.

“That was the coolest thing I’ve ever seen,” Matt, another beginner, said.

“Thanks,” I told him, feeling pretty awesome. As impressive as my feat of bravery was, it soon became the second coolest thing Matt had ever seen; Cody was busy rappelling down the cliff, supporting himself, traveling about ten times faster than I had.

Over the next few weeks, we got more and more comfortable on the rock. We moved from Winslow to Rumney, N.H., New England’s premier sport climbing location.

Each of us improved dramatically. We learned to trust our feet to support us, even when it looked and felt like we were clinging to completely smooth surfaces. We mastered the art of belaying, the partner-based rope system that supports climbers while they’re on the rock. 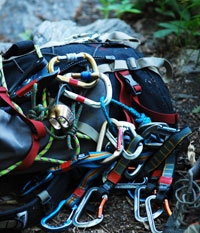 And we had so much fun. We heroically painted our faces with the powder Cody spilled from his chalk bag, we listened to bad country music in the van, and Terrance and Matt even staged a photo shoot in a waterfall.

Last week, as the van trundled back to Hanover from Rumney, I watched the New Hampshire landscape flash by. We passed old, old farmhouses, the kind I’d never seen before coming east from Oregon. We followed the Connecticut River for a while, the largest river in New England, and I watched it flow calmly southward.

The sun began to peek its way around the cloud cover, and we spotted a double-arched rainbow. It was incredible, that drive: history and beauty rolled into one amazing countryside, just a stone’s throw away from campus. I looked around the van and saw happy, exhausted faces. We were tired, we were hungry, we were dirty, and once again, I couldn’t have imagined a more perfect Dartmouth day.