PART 3: On top of the world 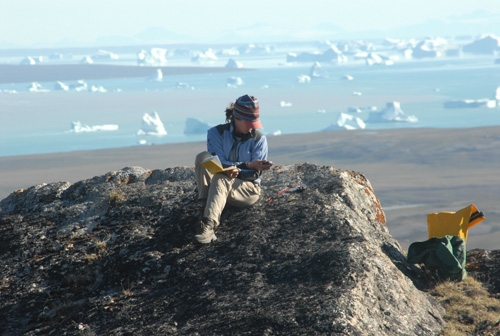 Assistant Professor Meredith Kelly prepares to gather rock samples in Greenland. Lab analysis of the material she collects in the Arctic offers insight into climate variation.

Meredith Kelly has traveled to Greenland three times since 2004. Starting from Hanover, it’s Boston to Iceland; first Reykjavik, and then on to Akeyuri. From there, a chartered plane heads to Constable Pynt, Greenland, where there’s a Danish-run base with an airstrip and two hangars. The helicopters that take Kelly and her colleagues out into the wilderness fly from there.
Image 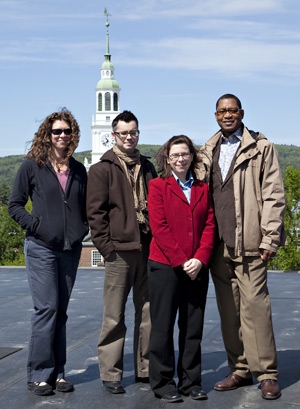 That’s the place where Kelly says she’s eaten the worst food in her life (pickled fish). But more importantly, it’s the gateway to the ice fields of Scoresby Sund, where Kelly searches for the answers to one of her work’s central questions: How have these arctic ice fields changed in the past? Understanding those alterations over time helps put current change in context and offers insight into climate variation over epochs. National Science Foundation grants and previous funding from the Comer Science and Education Foundation support her work in Greenland.

The place, Kelly observes, is “visually stunning, in the intensity of the colors: reds of fall vegetation, blue sky and water, the white icebergs.” Its beauty is answered by its dangers: among Kelly’s gear is a large rifle, in the event a polar bear appears. “I haven’t had to use it; I hope I never will.”

The area where she works, Kelly says, “is beyond remote. There is no one else out there. Sometimes there will be Greenlandic people hunting along the coast line, but we have only seen them from afar.”

Given the expense and effort it takes to get there, Kelly notes, “we work intensely, in order to make full use of our time in the field.” It helps that the sun is always up, leaving plenty of daylight for the 15 to 20 miles per day that she and her colleagues sometimes cover, carrying 40 to 50 pound backpacks. “It’s crucial to keep our energy up,” she says. Their secret weapon: “gorp,” a trail mix recipe heavy on nuts and chocolate.

Each day’s field work involves mapping the terrain covered, and taking samples of rock—400 to 500 pounds of it—for analysis back in her Dartmouth lab. There, Kelly measures levels of the cosmogenic isotope Beryllium-10, information that can reveal the time frame for the rocks’ exposure to the atmosphere and help her understand the movements of the glaciers that transported them.

In the video below, students in Kelly’s “Earth’s Climate: Past, Present and Future” course take deep core samples from beneath Dartmouth’s Occom Pond to learn how northern New England’s climate has changed over 14,000 years. 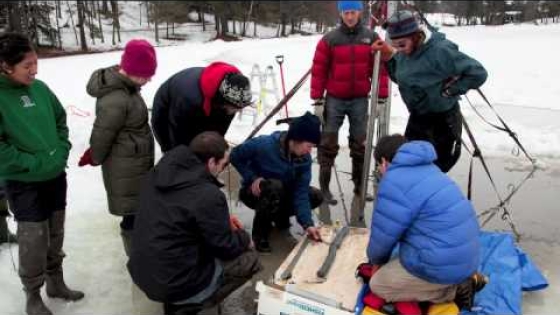