During the opening week of the exhibition “Tradition Transformed: Tibetan Artists Respond,” monks from the Namgyal Monastery and Institute of Buddhist Studies in Ithaca, N.Y., created a traditional sand mandala in the galleries of the Hood Museum of Art. In Tibetan Buddhist tradition, colored sand is used to create a circular design using spiritual motifs as a meditation aid. The creation is then ritually destroyed, symbolizing the Buddhist belief in the transitory nature of life. “I think the sand mandala ceremony was a beautiful illustration of the core beliefs of Buddhism, a religion most of us here at Dartmouth have very little exposure to,” says Liana Chase ’11 of South Salem, N.Y. “It introduces several Buddhist ideals that are counterintuitive for most Americans, including nonattachment and impermanence.” Chase, who is majoring in anthropology modified with psychology, organized a student dinner with the monks.

From January 19 through January 22, visitors to the Hood watched the mandala grow. When it was complete, the monks held a public ceremony to deposit the sand in a body of water—in this case Dartmouth’s Occom Pond—for the benefit of all beings. Watch time-lapse video of the sand mandala’s creation and dispersal below. 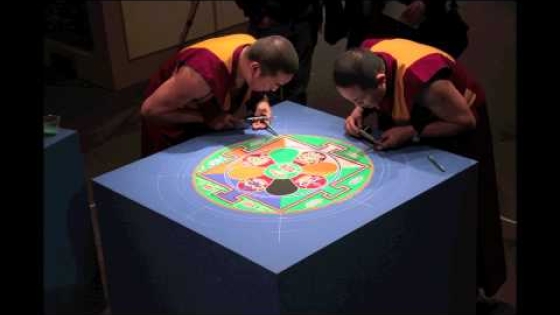