Mellon Assistant Professor of English Jeffrey Sharlet received the 2011 MOLLY National Journalism Prize for his Harper’s Magazine article “Straight Man’s Burden,” about the American roots of Uganda’s anti-gay persecutions. The award was presented to Sharlet last week at a ceremony in Austin, Texas. The MOLLY Prize recognizes journalism excellence by writers whose work focuses on civil liberties, social justice, or both, and is named in honor of the late Texas newspaper columnist and political commentator Molly Ivins. Maureen Dowd, a columnist for The New York Times’ Op-Ed page, and Joshua Kors, who covers military and veterans’ issues for The Nation, earned Honorable Mention awards as MOLLY finalists this year. 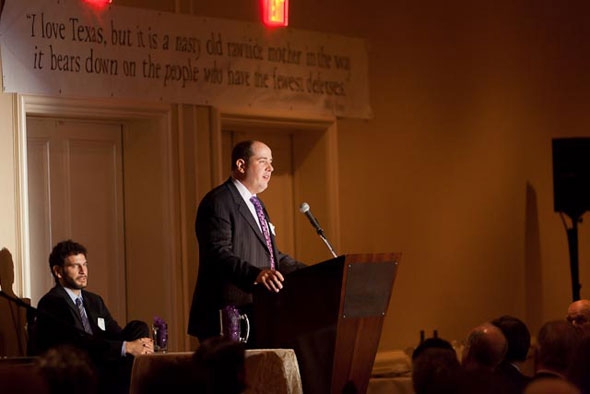 Jeff Sharlet, the Mellon Assistant Professor of English, accepting the MOLLY National Journalism Prize for his reporting on one of the most powerful Christian fundamentalist groups in America and its ties to anti-gay pogroms in Uganda. (photo by Dick Leverich)

“An awful lot of prizes are named for men who made their money in sketchy ways, so it’s a treat to win a prize named for a woman who made her name, if not a whole lot of money, by making fun of power,” said Sharlet, who is a contributing editor for Harper’s and Rolling Stone magazines and the co-founder of the online literary magazine KillingTheBuddha.com. “There wasn’t much to laugh about with Uganda’s so-called kill-the-gays bill, but I think Molly Ivins would have appreciated the absurdity of Ugandan legislator David Bahati’s attempt to roll up a campaign slogan of his hero Senator Jim Inhofe (R, OK)—‘God, gays, and guns’—into one initiative, ‘for the sake of the children.’ Reading Ivins over the years taught me that absurdity, brutality, and lies too often go together.”

Sharlet teaches creative nonfiction and joined the Dartmouth faculty in the summer of 2010. He is the author of C Street: The Fundamentalist Threat to American Democracy, a narrative portrait of a Ugandan anti-gay crusader that the Washington Post called “brilliant, even courageous,” and The Family: The Secret Fundamentalism at the Heart of American Power, which spent 26 weeks on The New York Times’ bestseller list. His next book, Sweet Heaven When I Die, a gallery of American outlaws, anarchists, fanatics, and saints, will be published in August. In May, Sharlet was awarded the International Gay and Lesbian Human Rights Commission’s 2011 Outspoken Award, which honors the leadership of an ally of the global lesbian, gay, bisexual, and transgender (LGBT) community.