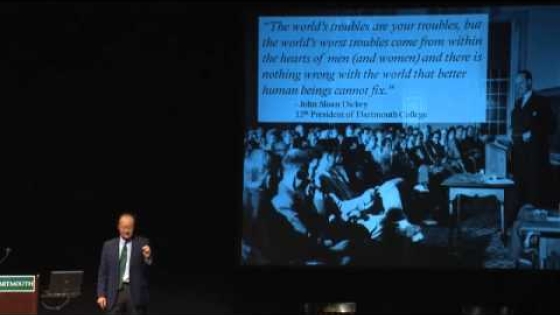 Remote video URL
Jim Yong Kim, MD, PhD, took office as the 17th president of Dartmouth College on July 1, 2009. The first physician to serve as Dartmouth’s president, he also is an anthropologist who brings a passion for learning, innovation, and service to Dartmouth.

President Kim is a co-founder of Partners in Health (PIH) and a former director of the Department of HIV/AIDS at the World Health Organization (WHO). He has dedicated himself to health and social justice work for more than two decades, helping to provide medical treatment to underserved populations worldwide. President Kim embraces the charge of preparing a new generation of Dartmouth students to tackle the world’s most difficult problems. He frequently references Dartmouth President John Sloan Dickey ’29, who told students at Convocation in 1946, “The world’s troubles are your troubles … and there is nothing wrong with the world that better human beings cannot fix.”

President Kim has been mentoring young people since his first teaching experience more than 20 years ago at Harvard University. He has taught undergraduate and graduate courses in anthropology, social analysis, social medicine, and global health. Before assuming the Dartmouth presidency, President Kim held professorships at Harvard Medical School and the Harvard School of Public Health. He also served as chair of the Department of Global Health and Social Medicine at Harvard Medical School, chief of the Division of Global Health Equity at Brigham and Women’s Hospital, and director of the François Xavier Bagnoud Center for Health and Human Rights at the Harvard School of Public Health.

He led an academic consortium of more than a dozen institutions in developing a World Health Organization report, “Interactions Between Global Health Initiatives and Health Systems: Evidence From Countries.” It was presented in June 2009 to the G8 Development Ministers’ Meeting in Italy.

Through his work with PIH and WHO, President Kim has helped to demonstrate that individuals previously viewed as untreatable can be treated effectively, even in impoverished settings. He led the 3 by 5 initiative at WHO, which sought to treat 3 million new HIV/AIDS patients in developing countries with antiretroviral drugs by 2005. Launched in September 2003, the ambitious program ultimately reached its goal in 2007. While working with PIH in Lima, Peru, in the mid-1990s, President Kim helped to develop a treatment program for multidrug-resistant tuberculosis (MDR-TB), which represented the first large-scale treatment of this disease in a poor country. Today, treatment programs for MDR-TB are in place in more than 40 nations. President Kim also spearheaded the successful effort to reduce the price of the drugs used to treat this form of tuberculosis.

A former executive director of PIH, President Kim continues to serve on its board. The Boston-based nonprofit partners with impoverished communities in Haiti, Peru, Russia, Rwanda, Lesotho, Malawi, and the United States to provide medical care and social services. He and Dr. Paul Farmer founded PIH with other colleagues in 1987 while the two were students at Harvard Medical School. The work of Dr. Farmer and PIH was chronicled in the book Mountains Beyond Mountains (Random House, 2003) by Pulitzer Prize-winning author Tracy Kidder.

President Kim’s work has earned him widespread recognition. He was awarded a MacArthur “Genius” Fellowship (2003), was named one of America’s “25 Best Leaders” by US News & World Report (2005), and was selected as one of TIME magazine’s “100 Most Influential People in the World” (2006). He was elected in 2004 to the Institute of Medicine of the National Academy of Sciences—one of the highest honors in the fields of health and medicine—for his professional achievements and commitment to service. Brown University awarded President Kim an honorary degree in 2009, and the Brown Alumni Association honored him with its William Rogers Award for Service to Society in 2008. In October of 2010, he was inducted into the American Academy of Arts and Sciences.

He has published widely over the past two decades, authoring or co-authoring articles for leading academic and scientific journals, including the New England Journal of Medicine, Lancet, and Science. With Dr. Farmer, President Kim co-authored “Global Considerations in Medicine” for Harrison’s Principles of Internal Medicine, 17th edition (McGraw Hill, 2008). He also has contributed to books on topics such as the global impact of drug-resistant tuberculosis and his edited volume, Dying for Growth: Global Inequality and the Health of the Poor (Common Courage Press, 2002), analyzes the effects of economic and political change on health outcomes in developing countries.

Born in 1959 in Seoul, South Korea, President Kim moved with his family to the United States at the age of five and grew up in Muscatine, Iowa. His father, a dentist, taught at the University of Iowa, where his mother received her Ph.D. in philosophy. He attended Muscatine High School, where he was valedictorian and president of his class and played quarterback for the football team. President Kim graduated with an AB magna cum laude from Brown University in 1982. He earned an MD from Harvard Medical School in 1991 and a PhD in anthropology from Harvard University in 1993. He is married to Dr. Younsook Lim, a pediatrician. The couple has two young sons.