Airborne System Allows Researchers to Look Beneath the Antarctic Surface

By Lee McDavid of the Dickey Center

A research team that includes Myers Family Professor of Environmental Science Ross Virginia has successfully tested equipment to map features under the ice in Antarctica that were formerly inaccessible by other methods. 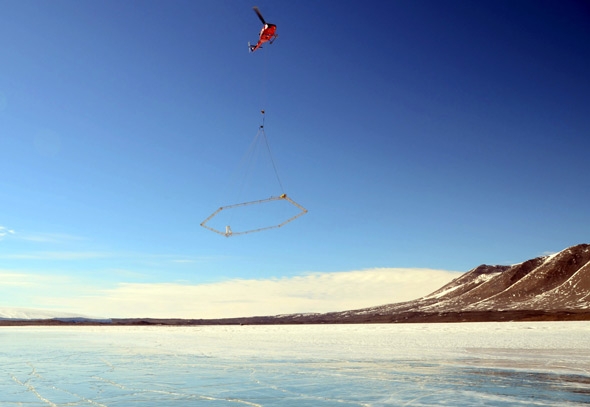 During its inaugural use, SkyTEM technology prepares to map topography at Lake Fryxell on the continent of Antarctica. The National Science Foundation-funded technology package uses an antennae suspended beneath a helicopter to see the character of the subsurface—groundwater, permafrost, rock, ice, and glaciers—to depths of approximately 1,000 feet. (photo by Lars Jensen)

A technology package called SkyTEM, developed by a Danish research team, allows researchers to view the hidden distribution of groundwater and ice for the first time in the McMurdo Dry Valleys region of Antarctica.

SkyTEM uses an antennae suspended beneath a helicopter to see the character of the subsurface—groundwater, permafrost, rock, ice, glaciers, etc.—to depths of approximately 1,000 feet.

“The McMurdo LTER [National Science Foundation (NSF)-funded Long Term Ecological Research] is studying the past and present climate to, in part, understand how climate change in the future will affect biodiversity and ecosystem processes of the dry valleys as an integrated system,” said Virginia, who is also director of the Institute of Arctic Studies at the Dickey Center for International Understanding. “This fantastic new view beneath the surface will help us sort out competing ideas and theories about how the valleys have changed with time and how this history influences what we see today.” 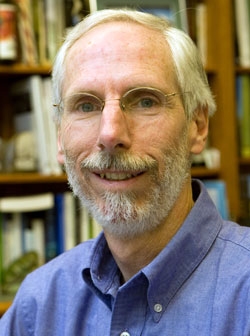 Myers Family Professor of Environmental Science Ross Virginia is a member of the research team that has successfully tested equipment to map features under the ice in Antarctica. (photo by Joseph Mehling ’69)

The SkyTEM project is led by Jill Mikucki, assistant professor of microbiology at the University of Tennessee Knoxville, and former faculty member in the Department of Earth Sciences and Environmental Studies Program at Dartmouth. Mikucki was an Arctic Fellow at the Institute of Arctic Studies, and she has worked with Virginia and LTER investigators during eight field seasons in Antarctica.

By using a non-invasive system in environments such as Antarctica, and combining that with traditional research on subsurface microbial ecosystems, scientists can gain insights into the potential for life on other planets that might have had similar environmental conditions.

“The ice cover in Antarctica means that researchers need to use creative technologies to study the processes operating there,” said Alexandra Isern, Antarctic Earth Sciences program director in NSF’s Office of Polar Programs, which funded the SkyTEM project. NSF manages the U.S. Antarctic Program, through which it coordinates all U.S. scientific research on the southernmost continent and aboard ships in the Southern Ocean as well as related logistical support.

The interdisciplinary SkyTEM team draws together collaborators from The Aarhus University in Denmark; Dartmouth College; the New Mexico Institute of Mining and Technology and University of California Santa Cruz.

In addition to studying the dry valleys, the team probed the Taylor Glacier, which contains a subglacial microbial ecosystem whose cold and dark uniqueness allows researchers to further study microbes in an environment that may have existed on Mars, thus providing insight to the potential for life on Mars.

Mikucki was also a faculty member in Dartmouth’s NSF-funded IGERT PhD graduate program in polar environmental change. IGERT brings together faculty and students from ecology and evolutionary biology, earth sciences, and engineering to conduct cutting-edge polar research on the challenges of rapid environmental change. SkyTEM is the type of interdisciplinary research approach emphasized by the IGERT program.

“Jill’s collaborative SkyTEM team is an excellent example of what interdisciplinary research can achieve,” said Virginia.