Imagine the Next 250 Years

Hannah Iaccarino ’12 ran up several flights of stairs and burst into Professor David Bucci’s office waving a piece of paper in the air. “It makes me smile every time I think about it,” says Bucci, who teaches in the Department of Psychological and Brain Sciences. 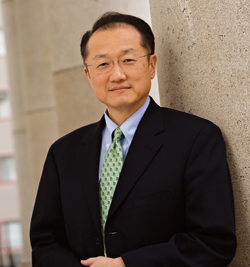 “No idea is too ambitious, no proposal too bold,” says President Jim Yong Kim. The strategic planning effort brings together representatives from all constituencies in the Dartmouth community to chart an aspirational path in anticipation of Dartmouth’s 250th anniversary in 2019. (photo by Joseph Mehling ’69)

Iaccarino, an undergraduate studying a novel model of schizophrenia in Bucci’s lab, had just gotten the results of an experiment and generated some ground-breaking data in the field of brain science. “She was red-faced and sweating, shaking with excitement. You can’t teach that. You have to experience it,” Bucci says.

It’s a story he’s told colleagues studying teaching and pedagogy as part of Dartmouth’s strategic planning process, which began in spring 2010. According to Bucci, understanding such discoveries is one way to inform the aspirational work that will allow Dartmouth to continue to excel and advance as a global leader in higher education.

“There are things you could read in a textbook that you are not going to learn very well until you are in my laboratory, working with me, making decisions on how to use information. The future is going to be focused on allowing more students to have those sorts of experiential, transformational moments,” Bucci says. 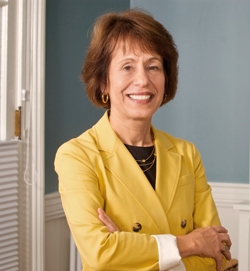 “Every aspiring institution needs to take stock of where it is, and where it wants to be,” says Provost Carol Folt, who is leading the strategic planning process per the request of President Kim. Nearly 200 faculty members are on working groups, with hundreds of others participating in interviews, sounding board sessions, open forums, and other venues. (photo by Rob Bossi)

Making more transformational experiences available to students across the institution and opening up opportunities for collaboration and discovery are among the goals at the heart of the planning process, says physician Leslie Fall.

A Dartmouth Medical School professor, Fall didn’t have much exposure to arts and sciences faculty and programs until she joined a strategic planning working group. While meeting with colleagues, she came across an unusual idea for teaching interviewing skills to new physicians—acting.

“We could link the theater program with the medical program and teach improvisation, because interviewing patients is very improvised at times,” says Fall. The example applies to the broader strategic planning objective: “How do we continue to make those connections and innovations? Those are the ideas we’re talking about.”

Strategic planners are considering many questions: Who will Dartmouth’s future students be and where will they learn? What new teaching methods will faculty employ? How will research and scholarship change? What’s in store for graduate programs, the use of technology, and the way staff do their jobs?

The effort brings together representatives from all constituencies in the Dartmouth community to chart an aspirational path in anticipation of Dartmouth’s 250th anniversary in 2019.

“No idea is too ambitious, no proposal too bold,” says President Jim Yong Kim. “One of the things that we know for sure is that if universities and colleges like Dartmouth are not actively trying to understand what the future might look like, we’re going to fall behind.  That’s the whole point of strategic planning.”

President Kim has asked Carol Folt, provost of the College, to lead the planning process.

“Every aspiring institution needs to take stock of where it is, and where it wants to be,” she says. “This is an opportunity to establish a process for continuous innovation and improvement.” 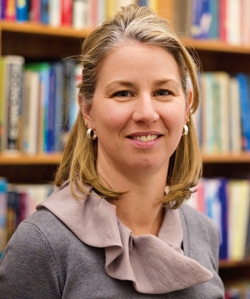 “Lots of people can identify current challenges. But we want to go beyond that,” says Professor Denise Anthony, chair of the Faculty Strategic Planning Advisory Committee. Anthony is an associate professor of sociology and research director of Dartmouth’s Institute for Security, Technology, and Society. (photo by Eli Burak ’00)

The planning process began with consultation and conversations involving members of the Board of Trustees, faculty, senior leaders, and alumni. The work, now in an 18-month action phase, is expected to conclude next December. Members of a steering committee, two advisory committees, and a host of working groups are taking part in the effort.

Last fall, strategic planning conversations were held with members of the President’s Leadership Council, the Alumni Council, and the Alumni Liaison Committee.

“Alumni participation has been a valuable part of the planning process and will continue to be,” says Vice President for Alumni Relations Martha Beattie ’76. 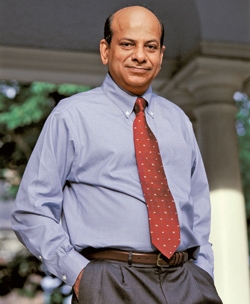 “If the 20th century is an American century, I say the 21st century is the global century, “ says Professor Vijay Govindarajan. “What are the implications of that for higher education?” Govindarajan, the Earl C. Daum 1924 Professor of International Business at the Tuck School, delivered the first lecture to strategic planners this fall. (photo by Rose McNulty)

“It’s very exciting to think about big questions, and remarkably challenging. We’ve sometimes had to push ourselves to be really aspirational. Lots of people can identify current challenges. But we want to go beyond that,” says Denise Anthony, chair of the Faculty Strategic Planning Advisory Committee. Anthony is an associate professor of sociology and research director of Dartmouth’s Institute for Security, Technology, and Society.

“The conversations and connections that have been made are really valuable, and it’s in a sustained way. That’s been one of the gifts of strategic planning—to build those relationships across the institution. That will pay off in all kinds of ways into the future,” Anthony adds.

Dartmouth has planned for the future before, but never with such a comprehensive effort. The process brings together the voices and vision of scholars and staff from Arts and Sciences; Tuck School of Business; Thayer School of Engineering; Dartmouth Medical School; the graduate programs; as well as students, alumni, and leading scholars in higher education from around the country.

“It’s the first time we’ve engaged our entire community in thinking about Dartmouth’s future in such a sustained and purposeful way,” says Folt. “From the start, our faculty has led the way. They have worked hard to break down silos and find new, more effective ways to work together. All their meetings are thought-provoking, as they look across the higher education landscape for the most innovative ideas and think carefully about how every idea could play out in different contexts in Hanover.”

“We want to scour the world to try to find those things that strike us as truly forward-looking. What are the approaches to higher education that will truly be game changing?”

“One of the things we know must endure is the relationship that exists between professors and students. For years, that’s been the special sauce here at Dartmouth.”

“What would it mean for us to shape our education system around the immortal words of President John Sloan Dickey—‘There is nothing wrong with the world that better human beings cannot fix?’ Can we prepare our young people so that they’re able to tackle problems in a way that’s more effective and more innovative than any other institution in the country?”

“Great ideas are going to come out of this. But the most important part is that our faculty are going to have the time and protected space to interact with each other and really think big about where we’re going as an institution.”

“The future is extremely bright for Dartmouth. I think we’re in a sweet spot. I hope that on our 250th anniversary what we’ll see is everybody trying to emulate what we will have done by 2019.”

Folt says she’s has been impressed with the way the committees and working groups have been able to get so many people involved. Nearly 200 faculty members are on working groups, with hundreds of others participating in interviews, sounding board sessions, open forums, and other venues. “It is such a pleasure to be a part of this moment in Dartmouth’s history,” she says.

While the planners are gathering information from within the College, they are also hearing from outside experts through the new “Leading Voices in Higher Education” lecture series. Speakers in the series include Pulitzer Prize-winning writer Louis Menand, social psychologist Roy Baumeister, and humanities scholar and innovator Cathy Davidson.

Listening to the speakers is “a great opportunity to be a student again. It challenges us to think critically and creatively,” says Maria Laskaris ’84, dean of Admissions and Financial Aid, who co-chairs the Senior Executive Strategic Planning Advisory Committee with Vice Provost Martin Wybourne.

Professor Vijay Govindarajan, the Earl C. Daum 1924 Professor of International Business at the Tuck School, delivered the first lecture to strategic planners in the fall, asking community members to consider how education will change in the coming decades.

“If the 20th century is an American century, I say the 21st century is the global century,” said Govindarajan. “What are the implications of that for higher education?”

Strategic Planning: Getting Down to Work

The most shocking finding in some ways was that spending is completely uncorrelated with mortality.

Description
A study led by postdoctoral research associate Tonima Tasnim Ananna that clarifies the mystery of supermassive black holes in rapid growth stage is highlighted. She plans to “expand our study to larger distances of the universe.”
Logo
Image