The Amish community’s adherence to a lifestyle more typical of the 19th century, which includes driving horse-drawn buggies and living in homes with no electricity, is driven by religious beliefs. But the Amish’s adherence to educating their children in one-room schoolhouses, and then only through the eighth grade, is largely the result of a 1972 Supreme Court decision, Yoder v. Wisconsin. This 40-year-old ruling has “frozen them in place” and threatens the younger generation’s ability to earn a living in an increasingly complex society, argues Professor of Economics William A. Fischel in a recent paper. 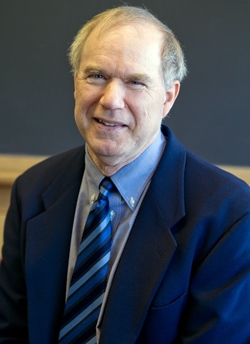 Economics Professor William A. Fischel’s paper “Do Amish One-Room Schools Make the Grade? The Dubious Data of Wisconsin v. Yoder,” was published in March by the University of Chicago Law Review. (photo by Eli Burak ’00)

“My criticism of the Yoder case is that it’s locked the Amish in amber in a way that’s not in their interest anymore,” says Fischel, whose paper “Do Amish One-Room Schools Make the Grade? The Dubious Data of Wisconsin v. Yoder,” was published this month by the University of Chicago Law Review. “Part of the reason it’s bad for the Amish is because farming is no longer an occupation that generates much income. The Amish have very large families—six or more children are common—and are sub-dividing their farms to small and inefficient sizes. They have to go into other businesses, but their options, aside from unskilled labor, are limited because they have only received an eighth-grade education.”

As Fischel explains in his paper, the Amish one-room schools and their endorsement by the U.S. Supreme Court were the result of American rural school consolidation from 1930 to 1960. Prior to World War II, most Amish attended the same rural one-room schoolhouses as their non-Amish neighbors.

“Back in the 1950s, the Amish were not a whole lot different from their neighbors, who were Lutheran, Presbyterian, and Catholic,” says Fischel. “They were all farmers going to one-room schools.”

But as larger, multi-grade schools were created in school districts around the country, and the mandated age for attending school was raised from 14 to 16, the Amish sought to establish their own parochial schools with Amish-approved teachers. 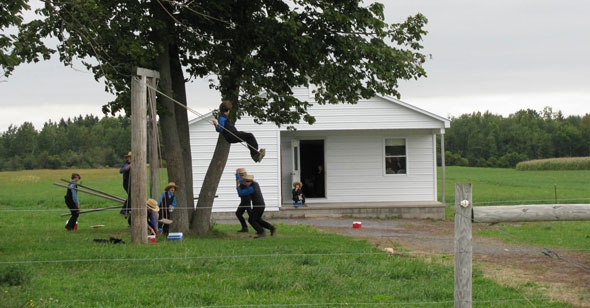 Amish children are educated in more than 1,300 one-room schoolhouses across America. The Amish’s adherence to educating their children in one-room schoolhouses, and only through the eighth grade, is largely the result of a 40-year-old Supreme Court decision, Yoder v. Wisconsin. (photo by Janice G. Fischel)

In the 1960s, after many Amish were jailed for refusing to send their children to public or private schools beyond the eighth grade, states such as Pennsylvania, Ohio, and Indiana, where most Amish reside, agreed to let the Amish follow their own educational path. An exception was Wisconsin, but the U.S. Supreme Court unanimously ruled that, “the Amish parents did not have to send their children to high school and could maintain their own elementary schools, subject to unspecified state regulations.”

There are nearly a quarter of a million Amish in the United States, and Amish children are educated in more than 1,300 one-room schoolhouses across America. Most of the teachers are young Amish women, who have also been educated in Amish schools and lack formal education beyond the eighth grade. The curriculum is limited, due partly to the time constraints of teaching eight grades in one room. “Detailed accounts of Amish school days indicate that almost three-quarters of each day is spent on reading, spelling, and arithmetic,” Fischel writes, adding that very little science, history, social studies, art, and music is taught.

The Amish are reluctant to now make changes to their formal educational system, Fischel says, because they fear it will nullify the Yoder ruling and they would “be at the mercy of state school officials. They feel that if they have eighth-grade schools and continue to perform along the lines of how they did 40 years ago, the government is not going to hassle them. And I think they’re correct in that assumption. But as a result they’ve now created this educational ceiling.”

As Fischel points out, the Amish have adapted to changing times in other ways, such as riding as passengers in cars, buses, and trains (their rules do not allow them to own or drive cars). They also employ calculators, use telephones and cellphones outside their homes, and accept modern medical care.

Fischel says, “The rules for the Amish schools are not divinely inspired, they are functional, in the sense that they want to maintain their separateness and self-identity. So the rules can bend.”

The rule Fischel wishes the Amish would now bend is the Yoder decision. “How can we get the Amish out of the Yoder bind?” he asks. “This decision is in effect a contract between the Amish and the Supreme Court. But their perception that they are bound by this is actually bad for them and their children.”

Fischel suggests that the Amish should consider increasing the education their children receive. “I don’t know exactly what that would be, though I’m sure it would be provided by the Amish and would be different from the public schools. But something has to be done to get them out of this bind.”