Three of Dartmouth’s four alumni Olympians competed in London over the last three days, with Erik Storck ’07 (sailing) and Anthony Fahden ’08 (lightweight crew) moving on in their multi-day events, while Evelyn Stevens ’05 placed 24th in the road cycling event on July 29. Sean Furey ’04, Thayer ’05 and ’06, competes in javelin on August 8. 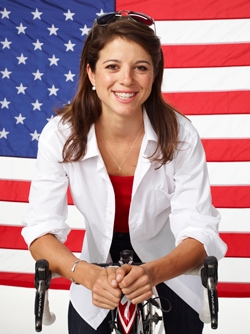 After her Olympic debut in London, Evelyn Stevens ’05 told the Valley News, “It was literally one of the most incredible experiences of my life. I will never, ever forget doing this race.” (photo by Mitchell Haaseth/ NBC Olympics)

Stevens, the former Dartmouth tennis player who left Wall Street in 2009 to pursue pro cycling, told the Valley News reporter in London after the rain-soaked race, “It was literally one of the most incredible experiences of my life. I will never, ever forget doing this race.” Watch race highlights—and see Stevens at the 50-second mark—in this NBC video.

Bloomberg News also interviewed Stevens after the race, talking to her about the thrill of being cheered by thousands of spectators along the race route and about how she got her start in cycling. Stevens, who beat 2012 gold medalist Marianne Vos in a race in Belgium three months ago, told the Valley News she plans to return to the Olympics in 2016. “Right now, after this experience, I want to race another Olympics,” said the 29-year-old Acton, Mass., native. “It’s the pinnacle of sport, in my opinion.” 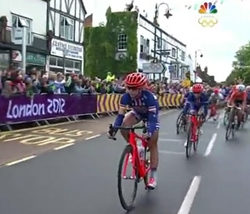 Fahden and his lightweight men’s four boat had a slow start in their first heat on Saturday, July 28, placing last, but rebounded to take first in the repechage—the consolation heat—on Sunday, July 29. The Ivy League Four, as they’re called, since all the rowers hail from Ivy League schools, improved their time from 6:02.42 on Saturday to 6:00.86 in Sunday’s race and will compete in the semifinal at Dorney Lake on July 31.

Fahden, who hails from Lafayette, Calif., and won a silver medal in the lightweight eight at the 2009 World Championships, told the Valley News on Sunday, July 29, “The rowing (Saturday) was just a little tentative, a little sloppy. We improved, and fortunately we were really lucky to come out on top in the (repechage).”  Watch the repechage race in this NBC video.

Storck sailed the first two of 15 races in the 49er class on Weymouth Bay in Weymouth, England on Monday, July 30. Storck, a resident of Huntington, N.Y., skippers the boat, and Trevor Moore of North Pomfret, Vt., is the crewman. The pair came in sixth in their first race and 10th in the second, and currently stand in seventh place overall. They sail twice on July 31, and, following several days of racing, the medal race for the 49er class will be held August 8.

The 49er made its debut at the 2000 Olympics and is the fastest boat in the Games; the sailors spend most of their time hiked out over the water in trapezes. The 49er skiffs are also extremely colorful, especially when boats round the mark and the sailors hoist the gennaker sail. These large, puffy sails sport each competitors’ national flags. Watch the NBC video of the sailing competition, and see Storck and Moore and their American flag gennaker at the seven-minute mark.