With headlines proclaiming the discovery of the Higgs boson—the so-called God particle—particle physics has captured the imagination of the world, particularly among those who dwell on the nature of the cosmos. But this is only one puzzle seemingly solved in a universe of mysteries. In a recent paper in Physical Review Letters, Dartmouth physicists delve into another enigmatic particle.

Dartmouth Professor Lorenza Viola is on the track of an exotic, subatomic particle, whose existence was first predicted 75 years ago. (photo by Joseph Mehling ’69)

By virtue of these attributes, the mysterious Majoranas may be instrumental in solving other mysteries, perhaps even redefining the nature of the universe. Some astrophysicists suggest that Majorana particles comprise the elusive “dark matter” thought to form more than 70 percent of the known universe.

Despite intensive searches, no elementary particle has so far been found that is a Majorana particle. Over the last few years, however, condensed-matter physicists have realized that Majorana could collectively form as “quasiparticles,” built out of ordinary electrons in matter, under appropriate physical conditions.

Thanks to their reputed robustness, these Majorana quasiparticles are believed to be suitable as the building blocks of quantum computers. Though theoretical at the moment, quantum computers have the potential to be orders of magnitude more powerful than our current digital devices. As envisioned, they would have immense capacities to store information and the ability to solve important computational problems with unprecedented efficiency.

The particle’s namesake, the brilliant Italian physicist Ettore Majorana, is himself a mystery. In 1937, he postulated the theoretical existence of such a particle. Then, in 1938, he withdrew all his money from the bank in Naples, boarded the boat to Palermo, and was never seen again.

Theorist Lorenza Viola, a professor of physics at Dartmouth College, has joined the search for the Majorana— the particle, not the man. Sharing the passion for the microscopic world with her long-lost countryman, Viola and her colleagues act as theoretical detectives, peering into places where the elusive particle might be hiding.

Pursuit of the Majorana is made more complex since particles and quasiparticles are operating in the realm of quantum mechanics, at the subatomic level where the rules of classical physics don’t apply. Quantum mechanics is the revolutionary body of principles that explains the behavior of matter and energy on the atomic and subatomic scale—in essence a different reality from the everyday observable world.

“The challenge we have is that we work with the microscopic, not something like stars and galaxies that you can see and relate to,” explains Viola. “I tell my students we are so big, this is so microscopic, and we just don’t have enough imagination to visualize things at this level. But if we could be tiny as an electron, we could understand the quantum world much better.”

These perceptual impediments notwithstanding, Viola is hot on the heels of the Majoranas. With Shusa Deng, a Dartmouth postdoctoral research associate, and colleague Gerardo Ortiz, a professor of physics at Indiana University, she has published a paper suggesting a locale where they may be found. They propose a theoretical model to support Majorana quasiparticles forming a class of exotic materials known as topological superconductors.

Viola describes the topological superconductors as having a “split personality.” Their outside surfaces conduct electricity like a metal, but inside they are superconductors. The Dartmouth crew hypothesizes that Majoranas should occur only on the surface or on the interior-exterior interface.  Remarkably, unlike existing proposals, Viola and colleagues’ proposal requires only conventional (so-called “s-wave”) superconductivity in the bulk of the material, and no application of strong magnetic fields, preserving the important fundamental symmetry of “time reversal.” 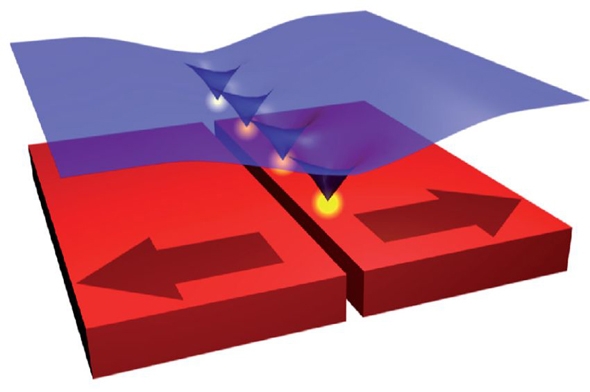 A schematic diagram shows Majorana particles as they might line up in two opposing magnetic fields (red) that interact with a superconducting topological insulator (blue). (Reprinted with permission from Neupert, Onoda, and Furusaki, PRL 105, 206404 (2010) (http://dx.doi.org/10.1103/PhysRevLett.105.206404); Copyright, the American Physical Society.)

The hunt for Majoranas is currently under way in laboratories across the world.  In a recent exciting experiment conducted by Dutch researchers, a semiconductor nanowire covered with a superconducting film was cooled in a strong magnetic field and found to possibly support Majoranas, as signaled by a peak in the conductance at zero energy. As additional experimental evidence is collected and scrutinized, Viola believes that s-wave topological superconductors will provide another rich arena in which to explore Majorana physics and further uncover new fundamental properties of topological quantum matter.