Lisbeth Labrada ’13 spent the summer hard at work in coastal Dili, the capital of Timor-Leste, also known as East Timor, a small country in Southeast Asia. There, at the Biro Pite Clinic (BPC), a free health clinic, the Dartmouth intern assisted health care providers in tending to indigent patients. BPC serves hundreds of patients a day, providing services ranging from maternity and infant care to diagnosis and treatment of tuberculosis, malaria, dengue fever, and HIV.

The experience, Labrada says, has had an impact on her dream of becoming a doctor.

“I could have searched for a place closer to home,” she says, “or maybe a Spanish-speaking country, but I was really taken by the idea of going somewhere different, and to a place that few Americans had ever heard of.”

A typical day for Labrada began with 8 a.m. rounds with other students in the general and malnutrition wards, the maternity ward, and two TB wards. The experience has been eye opening, she says. “I’ve learned about and seen leprosy, as well as myriad presentations of TB, and the effect of vitamin A deficiency and malnutrition in children.”

Labrada’s experience was made possible by funding from the John Sloan Dickey Center for International Understanding through its International Internship program, which aims to broaden students’ international and cultural understanding. Labrada sought the internship as a way to gain clinical experience and at the same time use the Portuguese skills she learned in her classes and during previous foreign study travel to Brazil. A Cuban, Labrada speaks fluent Spanish and is majoring in Lusophone studies (Portuguese) modified with chemistry. 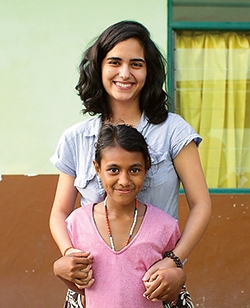 Labrada said she learned about East Timor’s connection to Portugal (colonized by Portugal in the 16th century, East Timor declared its independence in 1975) during her first year at Dartmouth. She took Portuguese and participated in the Great Issues Scholars program, run by the Dickey Center, for first-year students with an interest in international issues. She then enrolled in the Portuguese Language Study Abroad program to study in Salvador da Bahi, Brazil, in 2010.

Invigorated by the language and the culture, Labrada returned to campus and took Portuguese literature courses. In 2011, she spent an alternative spring break participating in the Dartmouth Global Leadership Program, for which she volunteered as an activity leader for a college readiness program for ninth- through 12th-grade minority students in Houston.

Labrada returned to Brazil through the Portuguese Foreign Study Program her sophomore summer, and volunteered at Lar da Criança orphanage, where every day after classes she and a friend helped the children with schoolwork and played games with them.

Labrada, whose studies have earned her a Rufus Choate Scholar award, a Thomas Family Dartmouth Endowed Scholarship, and the Christina Duplaá Prize in Iberian Studies and/or Peninsular and Latin American Women’s Studies, says Dartmouth’s study abroad programs have helped her with the linguistic and social skills that will be necessary for a pre-med student whose interests are global.

Most significantly, she says, “working at a clinic in a developing country prompts us to discuss medical ethical issues on a daily basis.”

Labrada plans to do an independent research study this fall and apply to medical school.