Jake Tapper ’91 clearly remembers when the first Iraq war began. It was his senior year fall and he was working in the Orozco Room of Baker-Berry Library.

It struck him that this new war was invisible. “It didn’t affect anyone in any way here at the time,” he says.

In the writing of his new book, Jake Tapper ’91 interviewed more than 250 soldiers linked to COP Keating and the region. (Photo courtesy of Ely Brown)

Tapper returned to Dartmouth this week and confronted that same disconnect, on the part of the Dartmouth community and the wider American public, from America’s longest conflict. Tapper’s book, The Outpost: An Untold Story of American Valor, is a very human history of Combat Outpost Keating, where eight U.S. soldiers died and 27 were wounded defending an isolated, ill-conceived and fatally vulnerable base in Afghanistan from attack by hundreds of Taliban fighters.

Last week, President Obama himself called Keating “indefensible” as he bestowed the Medal of Honor on retired Staff Sgt. Clinton Romesa, credited with saving the outpost of 57 soldiers from being overrun.

Tapper’s visit was a reunion of sorts with a friend and a key source for the book, Capt. Stoney Portis MALS ’13, the last commander of COP Keating and Romesha’s captain. Portis, along with Staff Sgt. Ron Bucca MALS ’13, last year helped found the Dartmouth Graduate Veterans Association. 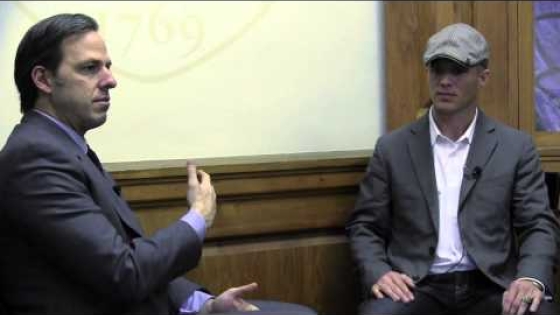 The story of COP Keating reads like a tragedy out of the Old West. The cavalry outpost was in the northeastern-most corner of Afghanistan in a valley surrounded by jagged mountains on the Pakistan border, Portis says. Taliban fighters could move freely through the high ground and fire into the American compound at will.

From the forward on, Tapper’s book presents countless voices of the soldiers and civilians warning of the outpost’s vulnerability and crippling isolation. Portis recalls that when he arrived at Keating, taking command just days before the attack, he thought of Fort Apache. And the Texas Cavalry officer knows his Western lore: A cousin, Charles Portis, is the author of True Grit.

With the October 3, 2009, attack on COP Keating, this tiny outpost became the focus of the national debate on the war in Afghanistan and the Obama administration’s impending decision on troop levels for the war, Portis says. After the attack, Portis’ soldiers were the subject of a political and media wave that Portis viewed as opportunistic and hostile to the people who were struggling to recover.

At the time of the attack, Tapper had just taken a break from his job as ABC News’ senior White House correspondent for the birth of his son. In Washington, the debate over the future of the war and Obama’s decision on “the surge” were center stage. The politics of Gen. Stanley McChrystal’s review of troop levels for Obama were a major story for Tapper, but the numbers had no human connection for him.

“I’d been covering the war in Afghanistan from the comfort of the North Lawn of the White House,” Tapper says.

“On October 3, 2009, I was in the hospital with my wife and newborn son, Jack, when out of the corner of my eye on the hospital TV, I caught news of a horrific attack on a U.S. base I’d never heard of—Combat Outpost Keating,” he says. ”It was a very poignant moment for me, holding my newborn son as I heard about eight other sons—eight US troops—taken from this Earth.“

That was the start of the story for Tapper. That story led him to Lt. Col. Brad Brown, the officer in command of operations in the Nuristan region of Afghanistan. Brown put him in touch with Portis.

Tapper interviewed more than 250 soldiers linked to COP Keating and the region. His reporting went through the top military brass to the White House and out to the residents of Keating’s nearest village, Kamdesh.

”The thing about Jake is that he’s got great perspective, having been in the White House for so long, about how at echelons above reality for the common soldier, the cabinet members and president are making these decisions that do affect strategy,“ Portis says. ”So I think he felt a need to tell this, a story about connection.“

It was the idea of making the war real for the people at home that brought Tapper and Portis together at a table in Occom Commons with photojournalist James Nachtwey ’70, the inaugural Roth Distinguished Visiting Scholar, who has spent his career creating intimate images of people brutalized by war, poverty, and disease.

From left, James Nachtwey ’70,  Jake Tapper ’91, and Capt. Stoney Portis MALS ’13, speak this week with students in the Graduate Studies program, members of the Dartmouth Graduate Veterans Association, and others from the Dartmouth community. (Photo by Eli Burakian ’00)

Nachtwey speaks with quiet intensity of his mission of illuminating the senselessness and brutality of injustice and war on the face of an individual. One of the most iconic of his photographs from the genocide in Rwanda, perhaps the ”least comprehensible“ of the horrors he has photographed, he says, centers literally on one man’s profile.

Nachtwey has met indifference or resistance from editors who don’t believe there is much interest in the struggles of ”invisible people.“ Tapper, too, has to pitch his stories to producers who believe the public has no appetite for war stories.

The challenge in telling those stories is to bring them to ground level and highlight  the daily lives and struggles of real people who are often invisible, Nachtwey and Tapper say.

Portis says he has made those kinds of connections at Dartmouth. A friend from campus came up to him as he was having a cup of coffee to say she had seen Tapper’s CNN profile of Romesha, the Medal of Honor recipient, and it had changed her view of the war and the soldiers who fight it. “She said, ‘You’re a student here but there you are in the book doing real things. It’s completely different,’ ” Portis says.

She said she’d been affected by the story in The Outpost of the eight men who died on that day. She told Portis, “You hear about 60,000 troops in Afghanistan, but I feel like I’m closer to the war than ever just reading about eight of them.”