Prominent intellectual and activist Cornel West will be on campus April 25 as part of an inaugural lecture series at Dartmouth.

West is the author of 19 books and one of the most recognizable intellectuals in America. A former professor at Harvard, Princeton, and Yale, West now teaches at Union Theological Seminary and is a frequent and often fiery commentator on major news networks.

West will give one of seven talks in a new lecture series called “Seeds of Change: Gender, Scholarship, and Social Justice,” which kicks off April 8. Another talk will feature the Dartmouth IGERT fellows who garnered international attention last December for their video “Science in Greenland: It’s A Girl Thing.”

The series is run by a pilot program, the Gender Research Institute at Dartmouth (GRID).

“I am looking forward to hearing these artists, scholars, and activists talk about the place of higher education in making important social change,” says Annabel Martín, chair of the Women’s and Gender Studies Program and the GRID steering committee.

Salbi has written two books; one is about her life growing up in Iraq under Saddam Hussein’s regime. In 2011, The Guardian named her one of the “Top 100 Women: Activists and Campaigners.”

Lewin is the executive director of Seeds of Peace, a group that brings together teenagers from opposing sides of conflicts, such as Israeli and Palestinian youth, for conversations to promote peace and understanding. She was profiled in the 2012 book How Great Women Lead alongside Hillary Clinton, Condoleezza Rice, and others. 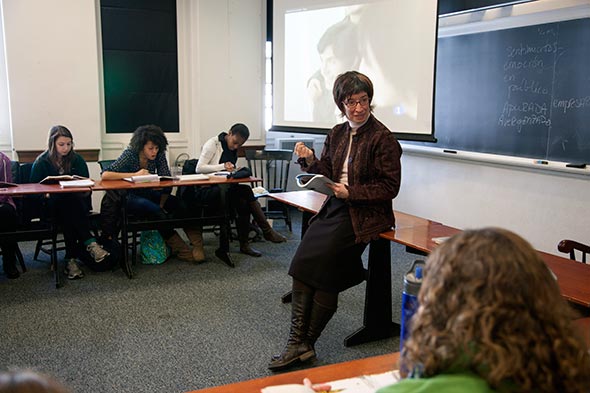 Chair of the Women’s and Gender Studies Program Annabel Martín says, “I am looking forward to hearing these artists, scholars, and activists talk about the place of higher education in making important social change.” (Photo by Corinne Arndt Girouard)

The Seeds of Change Lecture series is part of a GRID seminar program, which brings 18 faculty, senior staff, and undergraduate and graduate student fellows to research and talk about gender and social activism. The fellows meet 10 to 12 times throughout the term and attend the Seeds of Change series.  They will also participate in a GRID symposium “Body Politics: Women, Families, and Reproductive Rights” (April 30 to May 3), which is the kickoff event of the Women’s and Gender Studies recently established Katy Lebowitz 1976 Academic Enrichment Fund. Katy Lebowitz ’76 devoted much of her life to supporting women’s rights; the fund was established in her memory by her husband, David Lockard ’76.

The upcoming Seeds of Change speakers are: