Professor Peter Tse ’84 has won two PROSE awards from the American Association of Publishers for his 2013 book, The Neural Basis of Free Will: Criterial Causation, which argues there is a physical pathway for choice in the human brain. 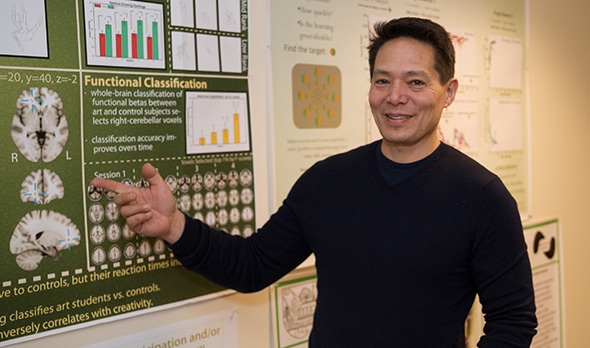 Professor Peter Tse ’84 says his recent book was an attempt to answer some hard questions about free will and the brain. (Photo by Eli Burakian ’00)

Tse’s work, published by MIT Press, won the Award for Excellence in Biological & Life Sciences and was also recognized in the Biomedicine & Neuroscience category. The association names annual PROSE award winners among professional and scholarly publications recognized as “pioneering works of research and for contributing to the conception, production, and design of landmark works in their fields.”

Tse, a professor of psychological and brain sciences, discusses in the book how neurons in the brain encode and transmit information and he argues that neurons can “rewire” each other.

“I started to ponder what neuroscience had to say about the big questions—is there free will? How can mental events be causal? What is the neural basis of consciousness? What separates our minds from that of a chimp, and how did our minds end up with their incredible capacities?“ says Tse. ”This book was my attempt to offer one set of answers to these hard questions. So it is of course nice to get this recognition.”