The West’s contemporary understanding of Jerusalem, one the world’s most contested cities, has roots in the Middle Ages, says Christopher MacEvitt, associate professor of religion. 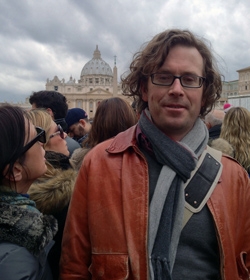 Now, thanks to a Frederick Burkhardt Residential Fellowship from the American Council of Learned Societies (ACLS), MacEvitt will have an extended opportunity to explore the topic further. He will spend the 2015-16 academic year at the American Academy in Rome, writing a book to be titled “Jerusalem Lost: the Holy Land and Islam in Christian Memory.”

“My project explores how western Christians came to think about Jerusalem, the Holy Land, and Islam differently in the 14th century,” MacEvitt says. After the Crusades, as the Holy Land “was re-conquered by Muslims in the 13th century, two contrasting visions of Jerusalem developed.”

In the end, he says, the view held by the Franciscans—members of the religious order founded by St Francis of Assisi—won out, an attitude that “did not seek to return Jerusalem to Christian rule.” That view also gave rise to “some of the most distinctive forms of piety of early modern Catholicism: the modern Via Dolorosa in Jerusalem, and its replication in every church in the form of the Stations of the Cross—and the popularity of crèche scenes everywhere,” he says.

MacEvitt spoke at Dartmouth on the topic of the book-in-progress in conjunction with a 2011 Hood Museum exhibition, “Envisioning Jerusalem: Prints from Dürer to Rembrandt.” He teaches courses on the Crusades and early Christianity, as well as the Department of Religion course “Patterns of Religious Experience.”

The ACLS is a private, nonprofit federation of 71 national scholarly organizations that advances scholarship by awarding fellowships and strengthening relations among learned societies.