Jan Gromadzki ’10, Thayer ’11, helped bring green energy to the Eiffel Tower, one of the most recognizable and most visited sites on the planet. As the project manager for New York-based renewable energy company UGE, Gromadzki has just completed the installation of two wind turbines 400 feet above ground on the Paris landmark. 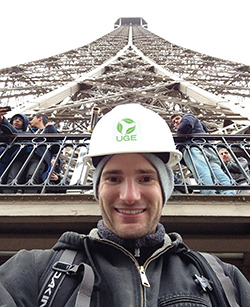 “The project is definitely a high point in my career,” he says, pun intended. “This is not something I could have ever imagined doing growing up, or thought possible even a few years back. It was an incredible experience, and I’m extraordinarily lucky and thankful to have been able to make it happen.”

Gromadzki was born in Paris and grew up near Geneva, Switzerland. “As a native French speaker, I was thrilled to work in my mother tongue, but had never done so in a technical way—so I learned a great deal of business and engineering vocabulary throughout this project,” he says.

Living in Brooklyn with his wife, Lily Chesnut ’10, Gromadzki delighted in the opportunity to return to his birthplace. “My parents got engaged on the Eiffel Tower in the Jules Verne restaurant on the second level—the restaurant I installed these turbines on. How crazy is that?” he says. “I felt like I was closing some sort of family loop. My family is very proud and very happy for me. I think they enjoy talking about the project even more than I do, especially my parents.” 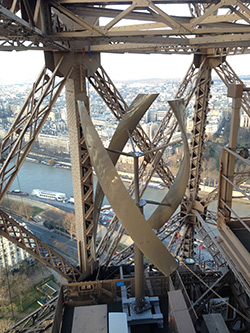 UGE had been contacted by the environmental consultants working on a three-year project, renovating the commercial spaces on the first level and creating new areas for visitors. Gromadzki says the city of Paris wanted to create some kind of renewable energy offset as part of the project. The Société d’Exploitation de la Tour Eiffel, the organization that manages the Eiffel Tower, wanted something that would make a visual statement without distracting from its distinct silhouette, a goal he feels they achieved.

Gromadzki came to the UGE and the Eiffel Tower project with a well-developed commitment to renewable energy that goes back to his Dartmouth days. He was an engineering science major in the Class of 2010 and then did a fifth year at the Thayer School of Engineering, graduating in 2011 with a bachelor of engineering degree.

“I absolutely loved my Thayer experience, especially my fifth year, when I was able to take a lot of the classes I didn’t have the chance to during my first four years,” he says. “My love for renewable energy was sparked during my ENGS 89/90 capstone project experience, where I was part of a team that designed a new mounting system for flush-mounted rooftop solar panels.”

UGE’s ethos, exemplified by the Paris project, provided Gromadzki with the means to continue his love affair with green energy. “The work on the tower itself posed numerous challenges, but as an engineer, I’m all about the challenge,” he says.

“Because we were space constrained and really high up, we had to progress very methodically and calculate every move. We were also working in a very restricted area,” Gromadzki says. “It was fun to be able to climb emergency stairwells and see the ‘back-end’ of the tower. It really put the whole tower in perspective, and gave me that much more respect for Mr. Eiffel. The tower is so simple, yet so intricate.

“During my trips up and down the tower I got to see and hear people from all over the world. Knowing that I was there for a reason other than sightseeing was particularly neat. I was just a guy in a hard hat surrounded by selfie sticks and tourists speaking dozens of languages.”

While the turbines offset less than 1 percent of the actual Eiffel Tower electricity use (the Tower consumes as much energy as a town of 3,000 people), this installation is definitely more of a symbolic statement. “But it is still significant because the merchant spaces on the first level do consume energy,” says Gromadzki, “and being able to offset that consumption is something people can really assimilate to and understand.”

Description
Amro Farid, an associate professor of engineering, is quoted in a story about how the regional grid in New England needs updating to carry more renewable energy from solar, off-shore wind, and other clean-energy projects.
Logo
Image