Behind the Scenes at ‘The Late Show with Stephen Colbert’ 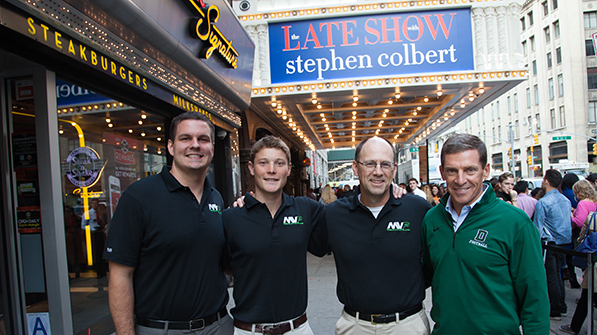 Elliot Kastner, Quinn Connell, John Currier, and Buddy Teevens in front of the marquee for The Late Show with Stephen Colbert. (Photo by John Cramer)

Vinnie, the muscular security chief for The Late Show with Stephen Colbert, stepped to the curb at the backstage entrance of the Ed Sullivan Theater in Manhattan when Dartmouth’s entourage pulled up with its Mobile Virtual Player (MVP) Thursday afternoon.

A former U.S. Drug Enforcement Agency agent who’s built like a linebacker, Vinnie glanced into the SUV at football’s first padded humanoid. “Whoa,” he said, chuckling. “Can I take a crack at him?”

So began the television debut of the MVP, a robotic tackling dummy developed by Thayer School of Engineering and Buddy Teevens ’79, the Robert L. Blackman Head Football Coach.

The MVP—two of them actually—were ushered inside, where producers, stage crew members, and others were busy preparing for rehearsal. The iconic theater is a labyrinth of nooks, crannies, and historic features, including a stained glass dome ceiling—with angelic likenesses of Colbert recently added—combined with a high-tech set, featuring LED lights and video walls. 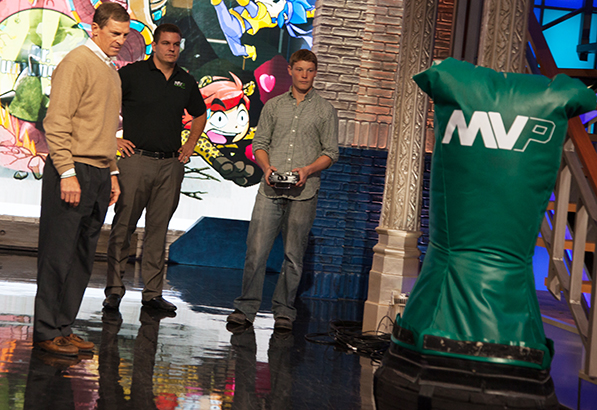 Elliot Kastner ’13, Thayer ’14; Quinn Connell ’13, Thayer ’14; and Thayer Research Engineer John Currier ’79, Thayer ’81, quickly got the two MVPs ready. The Thayer trio designed the MVP in collaboration with Teevens, a prominent advocate for eliminating player-on-player tackling in practice to reduce the incidence of concussions and other injuries. The MVP is the first powered device that simulates a real football player in size, weight, agility, and speed, replicating an in-game experience. The motorized prototype looks like an ordinary tackling dummy but is wheeled, self-righting, and remotely controlled.

Dartmouth and the Development of the MVP

Once up and zipping about the stage, the MVPs drew admiring comments from the crew. “Stephen’s gonna love this,” one guy said.

While the show’s band warmed up, the producers laid out the segment in which Colbert would first interview Teevens and Kastner and then put on a Dartmouth helmet and shoulder pads and try to tackle the MVP. A producer stood in for Colbert during warm-ups, taking a number of flying tackles and tumbling onto soft crash pads on the stage under the guidance of a CBS stunt coordinator. 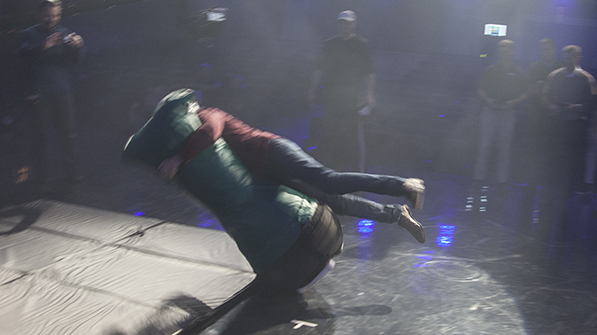 A Late Show producer tackles the MVP during warm-ups for rehearsal. (Photo by John Cramer)

Once the scenario was settled on, Colbert came out for rehearsal. The comedian was all business before taping. He went briskly through his monologue, which included a bit about the Chicago Cubs in the playoffs and a live baby goat being booted from the theater. When the time came for the MVP segment, Colbert greeted the Dartmouth group and walked through the tackling plan, then disappeared with his writers to fine-tune the show.

Teevens and the Thayer group went downstairs to wait in their green room, next to the green rooms for the show’s other guests, actress Cate Blanchett and Airbnb CEO Brian Chesky. They munched on breads, cheeses, and chocolates. After a while, Kastner and Connell took the MVP upstairs for a skit published on social media in which the dummy plays a pampered star in its own green room—adjusting the TV, checking out the goodie baskets, even taking a bathroom break. 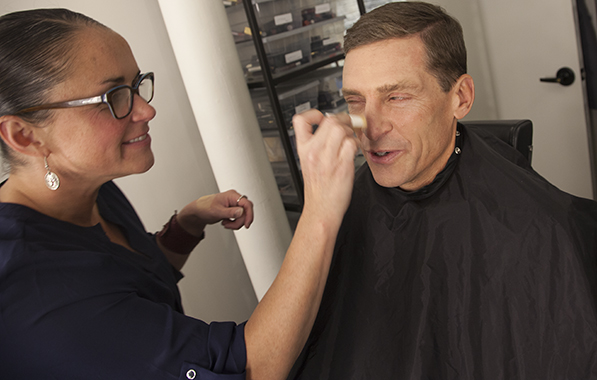 A makeup artist prepares Buddy Teevens for his appearance on The Late Show. (Photo by John Cramer)

Just before the segment started, Teevens and Kastner went into makeup, while Connell got in position to operate the MVP on stage. Once taping resumed, Colbert introduced Teevens and Kastner and asked about the origins of the MVP, its purpose, and plans to market the MVP to NFL and college teams.

When it came time for the tackling demonstration, Colbert introduced the MVP, which rolled onto the stage to raucous applause, green and white strobe lights, and smoke. Connell made the motorized dummy do some fancy footwork, darting about and spinning agilely, prompting Colbert to ask Teevens: “Does the robot always showboat like that?”

Teevens helped Colbert to strap on shoulder pads and buckle his Dartmouth helmet before giving him a quick lesson in proper tackling—“bend your knees, hit with your shoulder and keep your eyes up.” Colbert, a bespectacled, bookish man, confessed to having played only “one day of high school football” and expressed some doubt about what was about to happen. But he took a running start and tackled the dummy on his first try, somewhat awkwardly but to the delight of the audience. Both Colbert and the MVP popped right back up. “I’m fine, I’m fine,” he laughed, as the slow-motion replay ran on the house screens.

Afterward, Teevens and the Thayer engineers said they were pleased with how the show turned out.

“I think this was a terrific way to draw positive attention not only to Dartmouth’s academics and athletics but to finding ways to reduce concussive head injuries,” says Teevens, who returned to Hanover immediately after the show to continue preparations for Saturday’s homecoming game against Yale. “Unless we change the way we teach the game as football coaches, we’re not going to have a game to teach. We think the MVP device will revolutionize football. We can save people’s brains here.”