“Why is freedom ruled by our birth?”

Dartmouth’s all-female a capella group, the Rockapellas, helped kick off yesterday’s 15th annual Social Justice Awards ceremony with a performance that raised that question in song. Co-sponsored by the Martin Luther King Jr. Celebration Committee, the Office of Institutional Diversity & Equity, the William Jewett Tucker Center, the Dartmouth Center for Service, and the Geisel School of Medicine, the awards were established to recognize members of the Dartmouth community who have contributed significantly to peace, civil rights, education, public health, environmental justice, or social justice. Five individuals and one student organization were honored with awards at the ceremony and dinner, held in Filene Auditorium in Moore Hall. 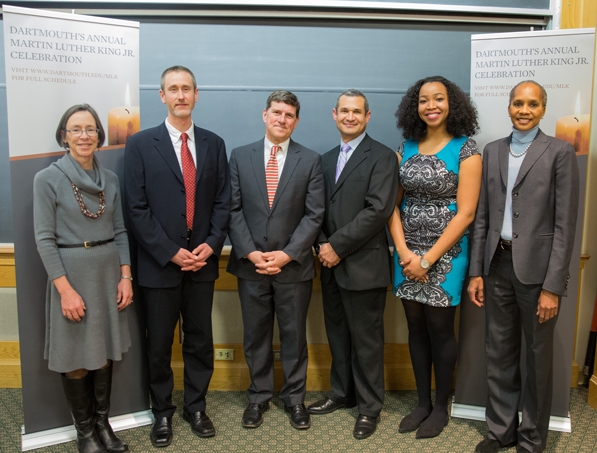 Evelynn Ellis, vice president of Institutional Diversity & Equity, presided over the ceremony, presenting the six awards across four categories: emerging leadership, ongoing commitment, lifetime achievement, and student organization. She asked the recipients to share with the audience their responses to three questions: Did your passion for social justice have roots in Dartmouth? How do you sustain that passion for your work? And what is one lesson you have learned about social change?

Below is a list of the honorees, and highlighted excerpts from their remarks.

Ongoing Commitment Award: Nancy Bloomfield ’99, co-founder of Cover Home Repair and executive director of the Family Place in the Upper Valley. (Because Bloomfield was traveling in Alaska, her remarks were read by Tracey Dustin-Eichler.)

For a decade, Bloomfield’s work has allowed her to serve children and teens, youth in state custody, and young families challenged to remain intact. “Sadly my work has introduced me to far too many children who experience the painful struggle when it comes to human connection. ... My passion for the work I am engaged in has been sustained by witnessing the small but significant shifts that can happen for a child in this circumstance when their courage has been rewarded through relationships and new experiences worthy of their trust.” 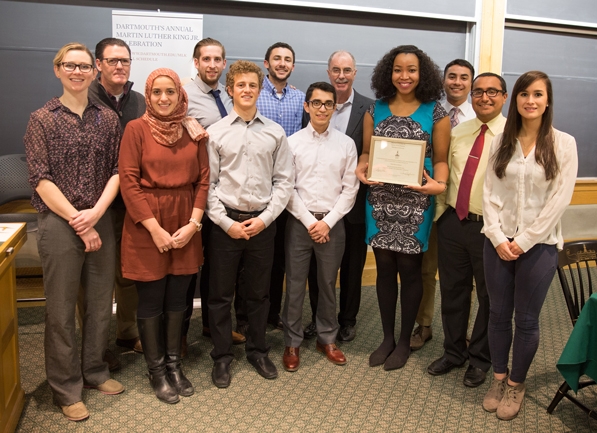 Members of the student group Urban Health Scholars pose on the night of the ceremony with President Phil Hanlon ’77, back row, fourth from left, and student adviser Shawn O’Leary, back row, left. (Photo by Robert Gill)

Lifetime Achievement: Ashley Bryan, professor emeritus of studio art and award-winning children’s book author and illustrator. (Bryan’s award was accepted on his behalf by his colleague Esmé Thompson, a professor of studio art, who read from his prepared remarks.)

Born in 1923 and raised in the Bronx, Bryan was drafted out of art school into the segregated US army at age nineteen. “Social justice has inspired and informed my interests and pursuits through life. Its call is inescapable. I brought this spirit to my students at Dartmouth. ... Every morning I awake with a childlike spirit of the adventure, discovery, and invention that the day holds in store for me. This is my way of making the dream of social responsibility an ongoing reality.”

“The passion can’t go away if the need is still there. ... Change can be done no matter where you are in life, no matter what stage you’re at.. A lot of times we think, as younger people, oh when I get to a certain place I’ll do this, or when I graduate from this program I’’l do that. We forget that a lot of change can be done now where we are. ... The little ripples— sometimes we feel like they are maybe not as significant as we want them to be, but I think they are, especially with all of us passionate about these things and doing them together.”

The Holly Fell Sateia Award: Keiselim “Keysi” Montas, associate director of the Department of Safety and Security, an award-winning poet and author, and well-known tango dancer.

Born in the Dominican Republic, Montas migrated to Queens, N.Y., at age 16, after a childhood marked by fear for his family’s safety. “I do not think I can even say that social justice is something that I am passionate about. Rather the practice of social justice is something that is part of me. Something with which I grew up. ... One lesson I have learned is that change is not easy, it takes time, but it is doable. It is doable because we are able to modify our behavior based on reason and our thinking. When applied, using multiple perspectives, we can and will overcome fear.”

Gordon has nearly four years of medical and public health experience in the global south, and continues to work overseas with his program CLIP (the Collaboration for Locally-Driven Improvement in Pediatrics.) “Finding out, figuring out first what is important to you as a human being, and then asking stakeholders what is important to them, and then trying to find where those two circles overlap, that is the win-win situation, that is the sweet spot. If you find that and grow it, and work with people to make it bigger, passion becomes part of the infrastructure of everything you do.”

As a student at Dartmouth in 1985, Keating witnessed his peers building shanties on the Green in protest of apartheid in South Africa. “That was education to me about dedication and sacrifice to a cause. ... How do I see social change happen? I think it’s by ruining dinner parties with sanctimony. (Laughter) ... or avoiding sanctimony at dinner parties, but trying to change people’s minds one thing at a time...It has to happen on the ground, on a daily basis, and if you can spread the message and move other people to think in that direction then you can fix some of the ugliness about the way we do things.”