Dartmouth is always a popular stop on the campaign trail, as candidates grapple for votes in the New Hampshire primary. It has also become an election-year tradition for the College to invite presidential speechwriters to campus to discuss the tools of their trade.

But campaign speeches and presidential communication have very different aims, says Don Baer, who served as a chief speechwriter and White House Communications Director for President Bill Clinton. Unlike stump speeches that usually lay out a range of positions for a friendly audience, Baer said a presidential address is “often about one thing, so you are making an argument, speaking not just to your base, but persuading other people to come along with you.” 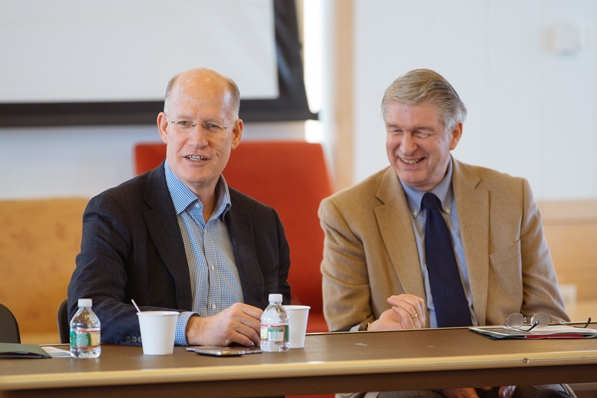 Don Baer, left, a former chief speechwriter and White House communications director for President Bill Clinton, and Clark Judge, a former speechwriter for President Ronald Reagan, talk to students during a workshop sponsored by the Institute for Writing and Rhetoric. (Photo by Robert Gill)

On Feb. 25, Baer elaborated on that point, joined by Clark Judge, former speechwriter for President Ronald Reagan, at a workshop hosted by Dartmouth’s Institute for Writing and Rhetoric.

Although Baer and Judge occupy different ends of the political spectrum, they express similar views about being the nation’s top speechwriter. “You are a mediator and a negotiator,” Judge said. “There are always going to be conflicts within the government and the administration. You as speechwriter are right in the middle of all that.”

Baer is now Worldwide Chair and CEO of the strategic communications firm, Burson-Marsteller. (Baer’s son, Adam, is a member of Dartmouth’s Class of 2016.)  Judge is a founder and managing director of another communications firm, White House Writers Group, and an opinion journalist.

The job of crafting communication differs widely depending on the speaker-in-chief, both said. Reagan, Judge said, was “highly disciplined” about sticking to his streamlined message. The first time Judge drafted a speech, Reagan returned it to him, “having removed about every fifth word.” But Reagan’s revisions retained what Judge called the “symphonic” nature of his rhetoric: “The entire range of meaning, tone, emotion—he could handle all that.”

Clinton’s language and delivery, Judge suggested, were more attuned to “improvisational jazz; lots of brilliant riffs that didn’t necessarily line up with one another, but each was brilliant in itself.”

Baer agreed, saying, “It was always a struggle to get President Clinton disciplined around themes.” Clinton, Baer said, was speaking to the American public but also to clashing constituencies inside his own party. “We were in the business of trying to adjust the Democratic Party to the reality of the change in the country that President Reagan and others had really brought, and how to bring a lot of those voters back to the Democratic Party—doing that, was a balancing act.” 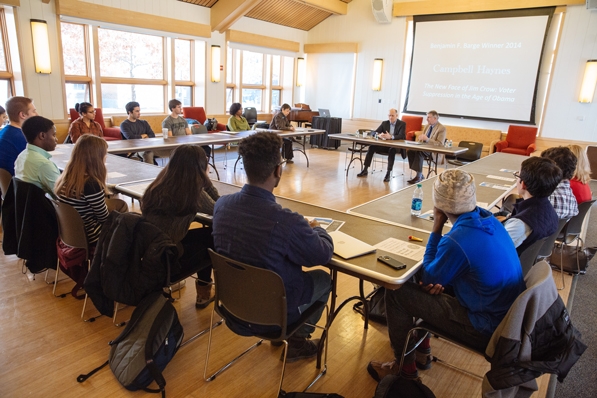 That balancing act is getting more complicated, both speechwriters told students, with changing demographics and the advent of social media. “Every form of communication is not just one way, it’s every way,” Baer said about the interactive nature of political speech today. Judge noted that during Rep. Paul Ryan’s 2012 speech accepting the nomination for vice-president, opponents tweeted out what turned out to be inaccurate rebuttals. “These days,” Judge suggested, “a campaign should be live-tweeting footnotes of a big, contentious speech, as a social media counterpoint.”

Both writers said that even though the media may be morphing, it would always be important to send clear, persuasive messages from the White House. “The more fragmented we are as a country,” Baer said, “the more we crave something that unifies. The presidential voice is one of the few, if not the only one left in this country that has the potential to be heard in a unifying way.”

Baer and Judge also agreed that the process of crafting a message begins long before words are written.

“Speechwriting is the hardest form of communication. It requires real depth of thought and research and the ability to see the forest for the trees and to understand what the larger context is, and how to articulate that,” Baer told students in a morning workshop.

Josh Compton, an assistant professor at the Institute, liked what he heard from the two men about the deeply researched process of speechwriting. “That’s really a core theme to what we are trying to teach, the idea of speech being not just a product but a process,” said Compton.  “One of the phrases we use in my classes is, ‘Speech is not just a way of showing what you know; it’s a way of knowing what you know.’ ”

After the workshop for speech students, participant Darnell Marescot ’18 said he was not surprised that two writers from opposing political parties could agree, for the most part, on what makes a powerful speech.

“At the end of the day, whether you are Democrat or Republican, despite the issues of the day and the different personalities of the speakers, the rhetorical purpose remains the same: You are looking to persuade, and force an issue. I think politicians have done a great job in the past, and our current president is also forcing the issue on a number of controversial topics that he is looking to move forward.”

After graduation, Marescot said, he hopes to use his communication training to consult for organizations promoting global development.

Written by
Charlotte E. Albright
Share this
FacebookTwitterEmailCopy a link to this article
Articles