Nicholas Norwitz ’18, a neuroscience and biology double major from Newton, Mass., has been named a Goldwater Scholar—one of 252 sophomores and juniors from throughout the United States to receive the honor this year. 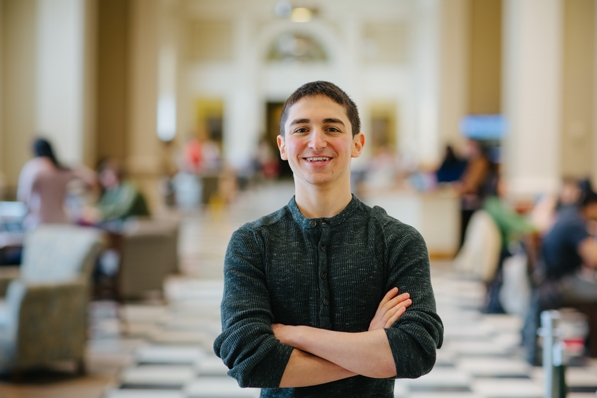 “I came to Dartmouth because I had heard about the relationships you can have with professors here, and my experience has so surpassed that expectation,” says Nicholas Norwitz ’18. (Photo by Robert Gill)

The Barry M. Goldwater Scholarship and Excellence in Education Program, established by Congress in 1986, seeks to provide the United States with a continuing source of highly qualified scientists, mathematicians, and engineers by supporting college students who intend to pursue careers in these fields. The scholarships cover the cost of tuition, fees, books, and room and board up to $7,500 per year. This year’s Goldwater Scholars were selected from 1,150 candidates.

Of receiving the award, Norwitz says, “To me it’s motivation to show that I deserve it. Somebody is saying, ‘We have confidence in you,’ and I don’t want to let that confidence down.”

Norwitz is a Rufus Choate Scholar, which recognizes students whose GPAs are in the top 5 percent of the class, and though he is still a sophomore, he has already received seven citations for his academic achievements in the classroom.

“Based on my interactions with Nick both in the classroom and in the lab, I think he has tremendous potential,” says Associate Professor of Biological Sciences Sharon Bickel, whom Norwitz credits with encouraging him to apply for the scholarship in the first place. After taking Bickel’s “Biology 12” course, Norwitz went to work in her laboratory, using Drosophila flies to study chromosomal abnormalities in aging cells.

Calling Bickel an “amazing mentor,” Norwitz says, “I came to Dartmouth because I had heard about the relationships you can have with professors here, and my experience has so surpassed that expectation.”

Norwitz plans to pursue a career in clinical neuroscience. “I’m really interested in how the brain works at a molecular level,” he says. “The field is so dynamic. I have no idea exactly what I might be doing as a physician-neuroscientist, but I am confident my line of work will not be stagnant. That excites me.”

He also hopes to one day teach at the university level. “I love teaching, but I also want to pay it forward—I’ve had so many incredible professors and peers that I credit with all my success. I feel responsible for being that combination of mentor and friend to students of the next generation.”

Outside of academics, Norwitz likes to experiment in the kitchen. A recent concoction: combined the active ingredients of black pepper (piperine) and turmeric (curcumin) to create a hummus-like dip with red kidney beans that he describes as tasting similar to tikka masala sauce.

“Curcumin has been shown to reduce the formation of beta amyloid plaques that lead to Alzheimer’s, and piperine increases the absorption of curcumin 2,000 percent, so the idea is it would be good for your brain,” Norwitz says. Health food aside, “I make a really good brownie,” he says.

A dual citizen of the United States and South Africa, Norwitz has traveled throughout the world, including South Africa, China, Mexico, Ecuador, the Galapagos, Panama, Costa Rica, the Caribbean, the Netherlands, Alaska, Hawaii, Israel, Greece, and Australia.

He is an avid runner and martial artist. In high school, he set an unofficial Massachusetts state record for push-ups (427 consecutively), and was the youngest qualifier for the 2014 Boston Marathon, which, despite a fractured tibia, he went on to complete—on crutches.

For more information about applying for the Goldwater Scholarship and other national and international scholarship programs, visit Dartmouth’s National Scholarships/Fellowships website.