“I am about trying to find things that work,” says the professor of engineering.

“The first step in realizing currently improbable futures is to show that they are possible,” Professor Lee Lynd said in a Tedx Dartmouth talk he gave in 2010. (Photo by Robert Gill)
6/13/2016
Body

“We would need about five earths to provide for a projected population of 10 billion in the world with, say, a Western European standard of energy service provision at current efficiency,” Lynd has said in one of the many lectures he has given about sustainable energy.

But we don’t have five earths. And Lynd notes that we are rapidly depleting the Earth’s resource capital. “We should be living instead from resource income,” he says. So Lynd has dedicated his career to finding an efficient, economical, and sustainable way to produce fuels from plants you can’t eat. In his laboratory at Thayer, Lynd and his team of nearly 20 researchers are searching for microorganisms best suited to converting cellulosic biomass—the tough parts of plants—into bioenergy. Currently, he says, the emergent cellulosic biofuels industry uses added enzymes and pretreatment, employing added chemicals and/or high temperatures to break down plant material. “This approach is inherently costly,” says Lynd. “I think we can do better.”

Why are cell walls so difficult to take apart? Evolution.

“Plants appeared over 1.8 billion years ago, and they have evolved to be tough. Breaking down plant cell walls efficiently and inexpensively is a hard job,” Lynd says. “We are at once trying to outwit nature and to take inspiration from her.”

His team is trying to beat nature at its own game. “We are trying to deconstruct plants, and nature has made that hard to do,” says Lynd. On the other hand, nature is also inspiring Lynd’s team to search for the microbes and strategies that are most effective at taking apart plants cell walls. “We now have—and this is recent—overwhelming evidence that some microorganisms and their enzymes are better at taking apart plant cell walls than the ones being used by industry today,” he says.

Lynd’s pick: thermophilic bacteria, which grow at relatively high temperatures. One of the most promising microorganisms is one that he first suspected would work decades ago, when he was a biology student at Bates College: Clostridium thermocellum. This bacterium makes its own enzymes, eliminating the step of producing enzymes prior to adding them to the cellulosic brew. In the mid-1990s, Lynd named this strategy “consolidated bio-processing.”

Lynd has been working with C. thermocellum for many years, pioneering genetic techniques to improve the ability of microbes to make fuels. Now he and his group are adding a new twist. “Once we got evidence that nature’s best microbes at taking apart plant cell walls were thermophilic anaerobic bacteria, we asked ourselves how to make their job easier,” explains Lynd. “We hypothesized that these small, thick-walled cells would tolerate milling as the fermentation proceeds, and have recently shown that this is the case.”

Within the last year, they have discovered that such milling—thus far, using ball bearings to macerate the liquefied plant brew—allows “near complete access to the fermentable part of cellulosic biomass,” and that it’s more effective to mill during fermentation than prior to it. “The next step is to show that milling can be done for acceptably low energy requirements,” says Lynd, “which we think is quite likely.”

In lectures explaining this new approach, Lynd often shows pictures of the cows his son raises on his dairy farm. “The cow alternately exposes biomass to biological attack and mechanical disruption to make new surface area available,” says Lynd. “We are doing the same thing. If this works as we expect it to, it would be truly revolutionary in terms of enabling biofuel production at low cost and small scale.”

Outside the lab, Lynd is active on big-picture issues related to biomass energy. “My wife says I have four jobs,” he says. “I’m a Dartmouth professor, focus area leader for the Department of Energy Bioenergy Science Center, executive committee chair of the Global Sustainable Bioenergy Initiative, and co-founder and chief scientific officer of Enchi Corporation,” an industrial biotechnology company.

Lynd has received many prestigious awards and grants for his pioneering energy work.  But for him, success is measured not merely by peers’ accolades. He has his eye on a bigger prize: a sustainable future. Lynd says reaching that goal means replacing a “business as usual” model with more visionary ambition. In a Tedx Dartmouth talk he gave in 2010, he said, “The first step in realizing currently improbable futures is to show that they are possible.”

The son of politically active parents, Lynd believes each generation should be accountable to the next.

“Future generations will judge us appropriately as to whether we were paying attention to the depletion of resources, and also to poverty,” he says. “So I think this is a big deal, to head for the high ground—to look for ways that bioenergy can be part of a solution to those problems.”

Joining the Search for Oldest Ice on Earth 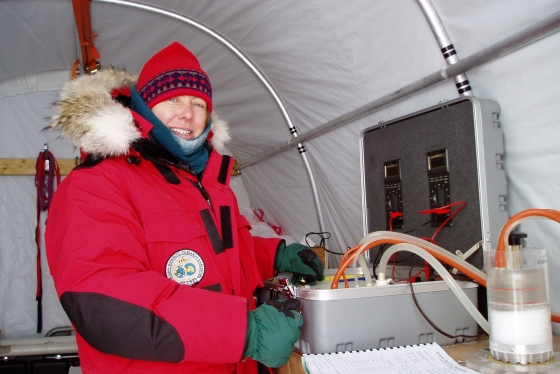