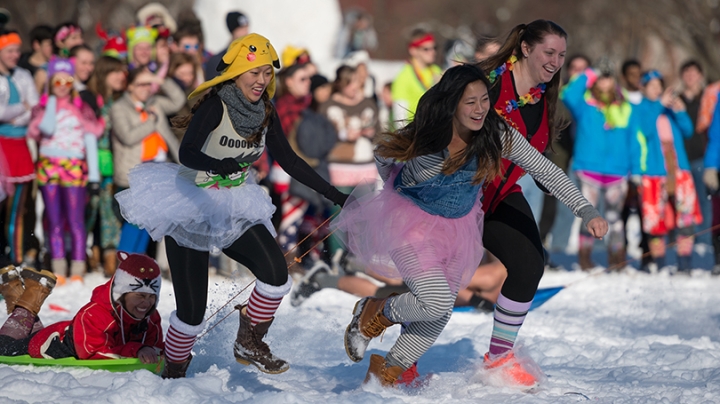 Bring your wands and your capes—there’s sorcery in the air as Dartmouth’s 106th annual Winter Carnival approaches. “Dartmouth College of Icecraft and Blizzardry,” the theme of this year’s four-day festival, conjures up an imaginary world, filled with intrigue.

For a full list of events, see the Winter Carnival Schedule for 2017.

“This year we’re creating a make-believe place,” says Audrey Scott ’19, one of three co-chairs on the carnival council, a 15-member student group in charge of events. “A lot of us grew up with the idea of magic, and for Carnival we’re being very kid-like, in a good way.”

A gallery of posters in a Collis hallway shows that children’s literature—especially fantasy—has been a popular theme for Winter Carnival over the years. Themes have included “Winterland of Oz,” “Through a Frosted Looking Glass,” “Where the Wild Things Are,” “It’s a Grimm World,” “There’s Snowplace Like Home,” “Down the Rabbit Hole,” and, of course, several books by Dr. Seuss (aka Theodor Geisel ’25).

The winner of this year’s poster design contest is Helena Eitel ’17. In her surrealistic scene, a hand holds a thin rod sending a plume of vapor into the night sky over a snow-covered Dartmouth Green. Almost hidden in the swirls are barely discernible shapes: a skier, a sled, an owl.

“I meant it to be an icicle wand with some sort of wintry spell coming out of it,” says Eitel, who lives in Seattle. “The winter season was kind of a new thing for me and it’s always been a beautiful part of my Dartmouth experience.”

Magic will swirl around indoors, as well. Common Ground, in Collis, will be transformed into a great hall for an opening celebration on Thursday, Feb. 9, with long banquet tables, candlelight, chamber music, and thematically inspired games. A magician will perform at a late-night breakfast starting at 1 a.m. Friday. Also Friday, One Wheelock—re-named, for this weekend, the Three Broomsticks—will host a pub trivia night. Saturday afternoon brings a wand-making workshop for children. Throughout the weekend, there will be music, dancing, and sports events.

Owls are a staple in witchcraft, so real ones will visit campus Saturday afternoon, courtesy of the Vermont Institute of Natural Science. Anyone who wants a bird’s eye view of what organizers hope will be a snowy Green can take a tour of Baker Bell Tower.

The Carnival council is planning to restore a few seasonal traditions that were absent during last year’s warm winter. If, as predicted, ice thickens on Occom Pond, swimmers can take a bone-chilling dip in the polar bear swim. Providing there’s enough snow on the Green, two-legged competitors wearing outlandish costumes will do the work of canines in human dogsled races. Artists will compete for cash prizes in the annual ice sculpture contest.

For the first time, Dartmouth’s new house communities are part of the planning, and there will be screenings of Harry Potter movies at House Centers A and B and Brace Commons on the East Wheelock cluster on Thursday, Friday, and Saturday.

The Office of Residential Life has created a skating rink on the Green, where there will be a broomball tournament on Saturday afternoon. The Occom Pond party, also on Saturday and  co-sponsored by the Hanover Improvement Society, will feature, weather permitting, skating, sugar-on-snow, sleigh rides, and pond quidditch (which, as Harry Potter fans know, is a magical competitive sport played by wizards and witches).

As always, some of the best alpine racers in North America will compete at Dartmouth Skiway, where lift tickets for recreational skiers will cost 99 cents. Nordic races will be held at the Oak Hill cross-country trails. But carnival-goers don’t have to cross a finish line to take home a trophy. Anyone who jumps into Occom Pond, competes in the dogsled race, and participates in one other event gets a commemorative “Tri-Blizzard Tournament” cup. The vessel will magically turn colors when filled with liquid.

“This is always a great time for the Dartmouth community and Upper Valley residents to pause and celebrate cold weather,” says Collis Center director Anna Hall. “Winter Carnival brings people together outdoors, maybe to try something new, like making an ice sculpture.”