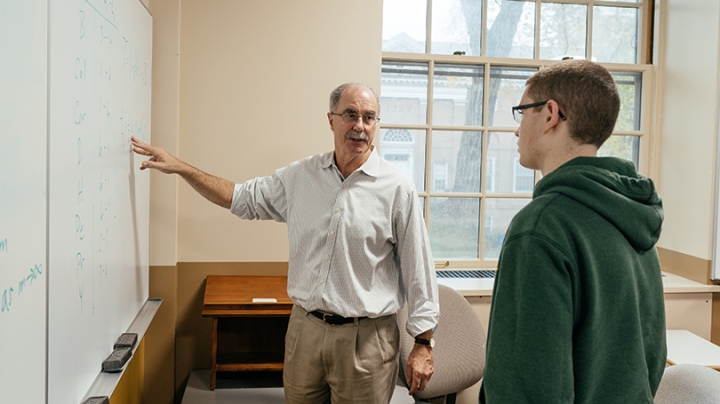 How do Americans feel about refugee resettlement? Do long lines at the polls affect election outcomes?  What are the odds that Serena Williams will defeat Maria Sharapova the next time they meet on the tennis court? To find definitive, data-driven answers to such questions, more and more social scientists are using statistical, mathematical, and computational tools in their research. That’s called “quantitative social science,” or QSS, and it’s an increasingly popular interdisciplinary program at Dartmouth.

“I am very mindful that we are preparing students for the world they are going to enter, and the more they can bring facts and analysis to the questions they ask, the better they are going to understand the answers,” says Hanlon. As a mathematician, he sees sports as a “data-rich environment” ideal for the application of statistical models and theories. But Hanlon says the ambition behind this course extends beyond the sports world. “Our aim is that students will apply evidence-based analysis to a broad range of issues they will encounter in life,” he says.

For a recent class, Hanlon applied Markov Chain methods from probability theory to the problem of team rankings. He discussed a set of methods, including one that outperforms the human and computer rankings when applied historically to predicting the outcomes of games in the NCAA Men’s Basketball Tournament.

Kendall Ernst ’18 says she likes this team-taught course because “it doesn’t sugarcoat the math.” She’s aiming for a career in the technology sector.

Sports teams are also hiring QSS experts. After graduation, Garrett Schirmer ’16 landed a job as an analyst with the Cleveland Indians, and is about to move back to his native Tampa to take a similar position with the Tampa Bay Lightning. “I’m using the same analytical techniques, probabilistic modeling, and data handling practices that I picked up in QSS at Dartmouth,” he says.

Other recent graduates are wrangling political data. Clara Wang ’17 works in Chicago for Civis Analytics, which was started, Wang says, by the data science team for Barack Obama’s 2012 presidential campaign. She says she enjoyed QSS at Dartmouth even though she was not a math whiz, because “it’s a great way to tackle real-world problems that you might learn about in humanities classes.”

QSS, by definition, crosses disciplinary boundaries, says John Carey, the John Wentworth Professor in the Social Sciences, who studies voting patterns around the world. “What was available in terms of information about the Argentine national election in 1976 was pretty sparse when I was starting out, but now you can get voting returns at the precinct level in a mayor’s race in a certain town,” says Carey, who helped launch the QSS program.

Yusaku Horiuchi, the Mitsui Professor of Japanese Studies, also researches voting patterns. For example, Horiuchi and his team used facial recognition technology to determine whether candidates who smile a lot are more likely to win support than more somber counterparts. Yes, smiling while campaigning can garner votes, but, says Horiuchi, to some extent the impact depends on location. For instance, “the effect is bigger in Australia than in Japan,” he says.

Horiuchi teaches QSS classes in data visualization, which he says is revolutionizing social science research. “The wealth of data at our fingertips encourages us to ask brand new questions we might never before have asked,” he says. “New methods are also being developed—in fact, are required—to advance research. Students need to learn a variety of techniques beyond essential statistics and mathematics in order to collect, analyze, and make sense of data in every field. That’s the power of QSS.”