During this year’s MLK Jr. celebrations, six awardees were recognized for contributions to social justice. 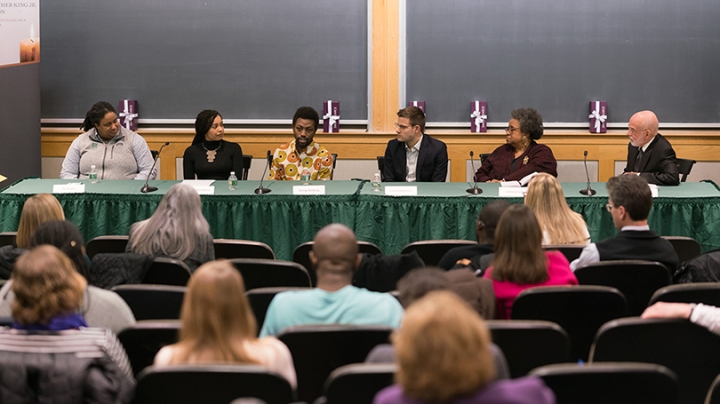 Each year during the College’s annual celebration of Martin Luther King Jr., Dartmouth recognizes members of the community for their significant contributions toward peace, civil rights, education, public health, environmental justice, and social justice. The event is co-sponsored by the Martin Luther King Jr. Celebration, the Office of Institutional Diversity and Equity, and the Dartmouth Center for Social Impact.

This year’s Jan. 25 celebration in Filene Auditorium began with music from the student group the Rockapellas, who sang versions of two songs by Sweet Honey in the Rock.

Vice President for Institutional Diversity and Equity Evelynn Ellis praised the 2018 awardees for standing up for justice in the face of sometimes disheartening setbacks.

“Your moral values outweighed your fatigue, your commitment to justice outweighed your doubt in the possibility of social justice for all Americans. Your love of humanity outweighed somebody else’s hate,” Ellis said.

After Ellis introduced the awardees, each spoke briefly about their work and the roots of their activism.

Draper has spent the past 12 years helping increase diversity and inclusion at Tuck and mentoring students throughout the College, including at LGBTQIA+ living learning community Triangle House, where she resides with her wife and 30 undergraduates. But she told the audience she originally intended a career in business, not diversity.

“I’m a magical unicorn: Black, gay, and female, and I struggled with that for a while, and resisted it. I was like, I’m not doing that—I’m a double-degree accountant.” But looking back over her choices, she says, “This is what I was put on Earth to do. My one word is ‘connect.’ All of my gifts and my talents, and the things I give a damn about, are about connecting.”

Alpha Kappa Alpha, the first black sorority in America, whose Xi Lambda chapter was chartered at Dartmouth in 1983

Representing AKA, Alexandrea Adams ’18 spoke of sorority members’ efforts to create spaces for people of color on campus, from organizing of Black Legacy Month, spearheaded by AKA member Marley Peters ’18, to sponsoring a $5 students of color ski day at the Dartmouth Skiway—an idea Adams, an avid skier, initiated after realizing “there were systemic issues that prevented students of color from skiing.” Adams has also organized swim lessons aimed at preparing students of color for the College’s swim test.

“Our chapter motto, ‘unity is strength, strength is beauty,’ reminds us how much we can impact Dartmouth and the world by working together,” Adams said.

Growing up in the small town of Winneba, Ghana, Boateng said, “The path to becoming a scientist or an engineer wasn’t really clear.” At Dartmouth, an “Engineering 21” course inspired him to create the Nsesa Foundation, which, among other initiatives, offers Ghanaian high school students summer programs in science and engineering, based on the “ENGS 21” hands-on learning model.

“I’m really hopeful of what we can create in the next decade,” said Boateng, who is preparing to begin a PhD program at ETH Zurich in Switzerland. “I get to shape a society in which young Africans can grow up believing that they can build the next big innovation or invention—a society in which my two nieces in Ghana, currently aged 2 and 6, can grow up believing not only that they can be scientists and engineers, but the very best that the world has ever seen.”

Kaufman—a former Marshall Scholar who earned a PhD and MSc in epidemiology from the London School of Hygiene and Tropical Medicine—spoke about how the opportunities Dartmouth gave him to study and work abroad changed him. “I showed up at Dartmouth without a passport. I had never been outside of the U.S., and I’ve now lived outside of the U.S. for the last 10 years and traveled in dozens of different countries, worked from Zimbabwe to the Dominican Republic to South Africa, and on projects all around the globe.”

Kaufman urged those working on social change to know why they do the work they do, to build a strong team of support, and to “really go all in. You need to bring your whole self and put your whole self in, no matter what it is that you do.”

Professor King, the first African American woman to earn tenure at Dartmouth, reflected on her family’s legacy of political activism, and on her four decades at the College, crediting people and groups at Dartmouth—in particular the Native American community—who “helped to complicate as well as enrich my understanding of what social justice is.”

To social justice activists, King said, “It’s critically important that you have a group around you that shares your values, that challenges you to remain faithful to those values, who keeps your spirits up during the really difficult and hard times—and there will be many of those.”

Terenzini, the coauthor of How College Affects Students, a seminal synthesis of 35 years of research on the impact of college experience, grew up in what he described as “lily white Vermont” and attended a Dartmouth where there were only “three black faces.”

But his passion for studying educational equity was informed by a trip he took with Dartmouth classmates to visit the historically black colleges and universities in the Jim Crow South, as well as teaching experiences in both wealthy and low-income public high schools in and around Boston.

“It led me into my research,” he said. “I was always interested in education and how could I turn what I was doing as an educator, and as someone interested in educational research, to the issues of equity and justice and fairness in the educational system. What could I do that would help other students have access to some of the advantages that I had had access to at Dartmouth?”