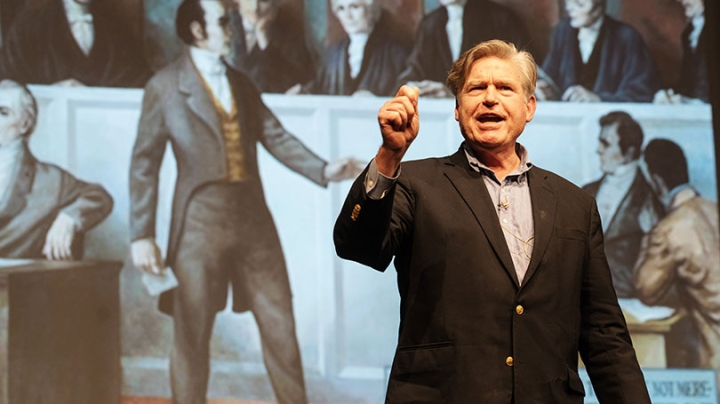 Professor Donald Pease, 250th celebration co-chair, describes a symposium in March on Daniel Webster, Class of 1801, and the Dartmouth College Case, planned as one of the commemorative events. (Photo by Eli Burakian ’00)
1/16/2019
Body

Clemens asked for a show of hands from those who had completed the training, and she applauded the audience when nearly all raised their hands.

“Thank so much to those of you who have done it. Of the 6,600 that I’ve sent that invitation to, we’re at about 21 percent, which is amazing,” she said. “I think it really demonstrates that our community is committed to supporting members, and to stopping inappropriate behavior, and to becoming more well informed.”

The Bridges program, and another online training for graduate and professional students that is still under development, are part of the broader C3I initiative announced by President Philip J. Hanlon ’77 on Jan. 3. C3I is a set of actions aimed at creating a learning environment free from sexual harassment and the abuse of power. The initiative is organized into five categories—campus climate, academic and professional development, recruitment, resources, and mandatory reporting.

The evidence-based report has many recommendations for addressing issues of power imbalance and lack of transparency in academia, and the College is committed to implementing many of those recommendations and to establishing an independent panel to monitor progress, Mills said.

“At some level, what we’re doing is trying things and seeing if they work. If they don’t work, we’ll make amendments to them, but we’ll keep trying to create a better environment,” he said.

Mills also mentioned several other institutional projects that are in the works, including changing the way the College heats most campus buildings as part of the sustainability goals announced by President Hanlon two years ago and also investigating the construction of more housing for graduate students.

Mills then shifted gears to talk about the 250th celebration, showing a video and then introducing Bascomb, who highlighted some of the events planned for the year-long celebration. She urged the crowd to keep an eye on the Dartmouth 250th celebration website, as new events are being added all the time.

Drawing on the celebration theme of “Honoring Our Past, Inspiring Our Future,” Bascomb said, “We are looking at how are we going to inspire our future and take part in creating the Dartmouth we want to see.”

One way, she said, is through the Call to Serve, a community service initiative with a goal of 250,000 hours of volunteer work by members of the Dartmouth community. “It will take all of us to make it happen.”

Pease described new academic courses and symposia created for the sestercentennial, all rooted in the liberal arts and all designed to foster reflection about how Dartmouth has grown and changed with the times and how it aims to shape the future as part of a global society.

He spoke in particular about celebrations and a symposium he is leading on the Dartmouth College Case, the landmark 1819 U.S. Supreme Court Case in which Daniel Webster, Class of 1801, convinced the justices that the College should remain a private institution and not become a state university.