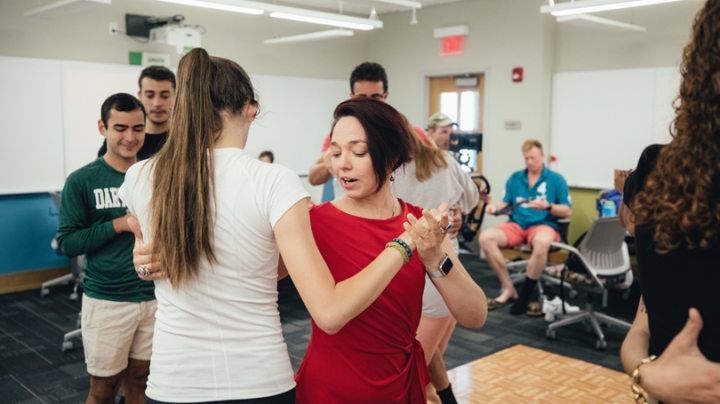 Finding a partner and dancing the tango is not the typical way to start a Spanish language class. But for Associate Professor of Spanish Noelia Sol Cirnigliaro, tango is an avenue into Latin American history, culture, and politics. That’s why she’s developed a course called “Tango Argentino: Music, Dance, Poetry, Community.”

“In order to understand a cultural or literary object from the Hispanic world, students of Spanish need to gain a deep understanding of its formal structure, its characters, the stories the work and its genre are designed to tell, and the political implications of those stories,” says Cirnigliaro.

“I envision this class as a laboratory in the humanities where students experiment with the social facets of this art form, just as they would find them in Argentina or other communities where tango is really thriving.”

On a warm summer morning, in Carson 61, computer screens on every wall show vintage videos of tango dancers embracing and encircling each other to sultry, syncopated music. Wearing black leather shoes with chunky heels and straps, Cirnigliaro invites, in Spanish, pairs of students to the center of the room to practice their steps on a portable wooden dance floor she’s installed for this class. To demonstrate an especially tricky maneuver, Cirnigliaro partners with Alaina White ’21, who follows her lead almost flawlessly. 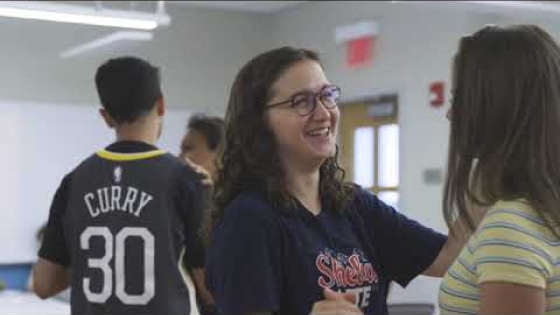 “The practice of dance is really at the core of what we do, because many musical, poetic, and communicative aspects of Argentine tango happen only in the tango embrace and nowhere else. Through their own senses, students are able to experience what tango is, how it sounds, how it reads, and how it is embodied by a community of enthusiasts,” Cirnigliaro says.

After the dance lesson, it’s time for a lecture and discussion, also in Spanish. Today’s topic is the golden age of tango, from 1939 to 1955, when Argentinian economics and culture dovetailed with international events—the Great Depression, World War II, and global migration and commodification—to set the stage for the rise and expansion of tango dancing in Latin America, the U.S., and Europe. Cirnigliaro’ s students are learning that in the 19th century, as immigrants coming into Argentina were trying to learn Spanish, dancing became a unifying form of entertainment.

“People were obsessed with tango,” says White. “If you couldn’t communicate through language you could communicate through tango. It’s an improvisation.” In the 20th century, she says, as the middle class grew, tango became a commodity that could be even more widely consumed, through radio and television.

Yuvraj Mahadeshwar ’21 says it’s also important to appreciate tango as a musical genre. “It’s not just the dance itself, it’s the song, it’s the rhythm. Part of learning to do it myself is that I get to express the language in in my own way. At times I get to be the leader, interpreting the song, and at others I am the follower, listening to another person’s story.”

Tango as Music, Tango as Medicine 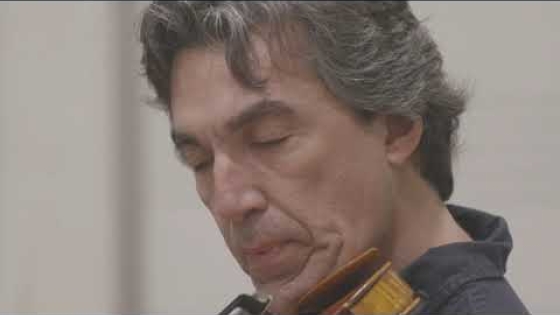 On another day, the class gets a visit from four musicians with the Grammy award-winning Pedro Giraudo Tango Quartet, based in New York City. On the piano, the concertina-like bandoneon, the bass, and the violin, they play a wide repertoire of pieces—some meant for dancing, others just for listening. In Spanish, Giraudo explains how tango music has evolved over the years.

That night, the class is invited to a demonstration by Giraudo’s ensemble with professional dancers Andrés Bravo and Sarita Apel at the East Wheelock house community dinner, followed the next day by more tango on the Green during the 250th celebration summer party.

Dancing the tango is not just fun, it can be therapeutic, as well. In New York, the Giraudo Quartet and dancers from the company bring tango into inner city schools and hospitals. This term, Cirnigliaro partnered with the Dartmouth Center for Social Impact (DCSI) to do something similar for Parkinson’s patients from Dartmouth-Hitchcock Medical Center at Open Door Integrative Wellness in White River Junction, Vt.

“The opportunity to offer a tango class  supporting the wellbeing of patients living with Parkinson’s and other neuromotor challenges—while providing Dartmouth students the opportunity to embody what they have learned over the term—was powerful,” says DCSI Associate Director Ashley Doolittle. “This social impact practicum explored the enhanced sense of connection people get from the tango, even without using words.”

Cirnigliaro says she’s been pleased to find so many ways to share the dance she loves with the Dartmouth community.

“I’m from the outskirts of the city of Buenos Aires. I’m an immigrant to this country, but I brought a piece of my culture with me. Argentina is part of my identity. It’s part of who I am. The special part of this class is that my students have decided to join me in this enterprise. There are some synergies coming together here.”

And, Cirnigliaro notes, you don’t have to take her class to dance the tango at Dartmouth. The Dartmouth Argentine Tango Society, which has over 400 members, hosts weekly dances followed by practice sessions, called practicas.