Study: As Climate Changes, So Will Maple Syrup Production

Vermont and New Hampshire will likely see less volume by the end of the century. 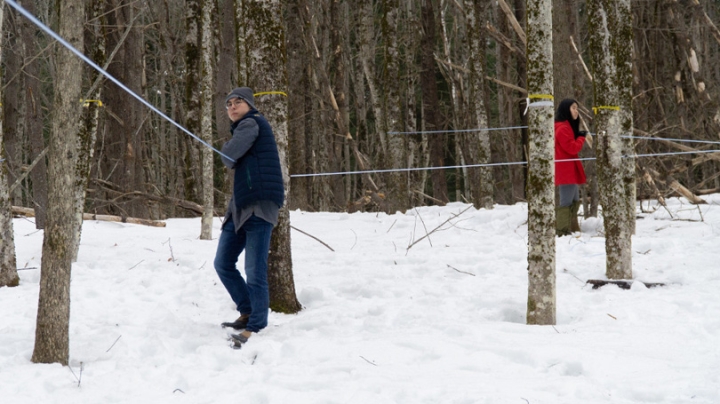 Maple trees are turning color, leaves are dropping, and soon the sap will go dormant until late February or March, when the sugaring season traditionally starts. But over the coming decades, climate change is likely to alter the timing of that cycle, and producers should brace themselves for the impact of rising temperatures on their industry, according to a Dartmouth study of six sugar maple stands from Virginia to Quebec.

In some locations, “as the climate gets warmer, the sugar maple tapping season will shrink and get closer to a December date,” says co-author David Lutz, a research assistant professor of environmental studies.

Lutz says maple syrup production is affected by two climate-sensitive factors. Sugar content is determined by the previous year’s carbohydrate stores. Sap flow depends on the freeze-thaw cycle. As a sugar maple tree thaws, the sap begins to move through the tree to the tap.

Over a six-year span, the research team tested how monthly and season-long average temperatures during the tapping season, and temperature and precipitation from the preceding year, affected sap flow.

Each day of the tapping season--from January to May—researchers obtained sap samples from 15 to 25 mature sugar maple trees. They measured the volume and weight of the sap and conducted an analysis of the sap’s sugar content. They also took daily temperature readings. With this data, the team looked at the annual variability of the sap flow from tree to tree and from year to year.

The study predicts winners and losers in the maple syrup world, as the planet warms up. Coming out on top: Canada, which already produces 80 percent of the world’s share of maple syrup. Québec, the country’s maple capital, is expected to increase production.

Losing out:  Virginia and Indiana, which, by 2100, will barely be able to produce any sap, according to the study. New Hampshire and Vermont, though likely to be the least-affected states, will experience decreases in syrup production. But Lutz says some producers are already taking pro-active steps to deal with a shortening season.

“For example, producers in our region often utilize vacuum-related tapping methods to ensure that sap collection remains steadfast when conditions are conducive to sap flow,” he says.

Furthermore, he says, many in the industry are aware that the microclimatology of their individual stands of sugar maples, known as sugar-bushes, is already changing and they are adjusting the structure of the tree stands to handle unpredictability.

“Our research is not meant to insinuate the downfall of the maple industry in New England. It does, however, indicate that challenges may arise as our climate changes—due to the shortening length of the season.”

Overall, shifts in supply and timing could disrupt a $140 million industry in the U.S., say the researchers, who call for additional studies on climate change and maple syrup production to help syrup producers, forest managers, and policymakers prepare for what’s ahead.