New Collection Explores the Legacy of The Occom Circle

Essays on the intersection of Indigenous Studies and digital archives. 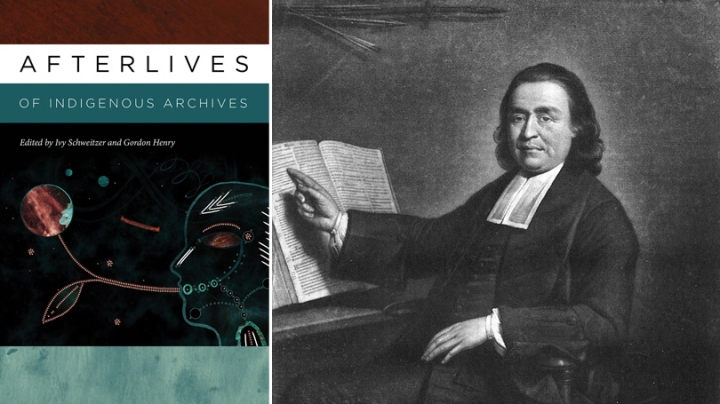 An event celebrating Afterlives of Indigenous Archives: Essays in Honor of the Occom Circle will take place Nov. 12. At right is a portrait of Samson Occom.
11/10/2019
Body

Some years back, while attending a Dartmouth Pow-Wow, Roland Harris, a member of the Mohegan tribe, asked Ivy Schweitzer, a professor of English, why Samson Occom didn’t have a higher profile at Dartmouth, since he was a notable figure in its history. Occom, a Mohegan Indian and a former student of Dartmouth’s founder Eleazar Wheelock, was a Presbyterian minister and missionary, intertribal leader, public intellectual, and writer.

There was no easy response at the time, but Harris’ question became the catalyst for The Occom Circle, a multi-year digital project co-led by Schweitzer and College Archivist Peter Carini and funded by grants from the National Endowment for the Humanities and We the People. The project digitized and preserved the College’s rich collection of manuscript documents by and about Occom, including letters, hymns, sermons, and journals, making them freely available to scholars, students, and community members online.

A new collection of essays, Afterlives of Indigenous Archives: Essays in Honor of the Occom Circle, represents topics explored at a 2016 symposium held at the College to celebrate the project’s launch. Schweitzer co-edited the collection with Gordon Henry, the Gordon Russell Visiting Professor in Native American Studies.

“The collection explores how cutting-edge digital tools can help to preserve and disseminate, where appropriate, ancient Native languages, documents, and cultures,” says Schweitzer, noting that the collection takes its title from the book’s preface. In it, Taylor writes that the question of how archives can serve the living Indigenous community today lies at the heart of the book’s essays.

According to Henry, an overarching strategy for reaching that goal is the expansion of archive access to support wider, community-based engagement with the materials. “Archives will have different lives, Native archival afterlives, in the hands of living Natives who can re-engage with archival materials to reimagine how archives might serve the lasting cultural, political, and educational needs of Natives,” he says.

The event is supported by the 250th Anniversary Committee and is open to the public .

If voters are deciding early, they may not have heard very much from an unknown challenger, or a challenger who sort of takes off towards the end of the campaign.