The award-winning novelist will talk with Dartmouth veterans and others in August. 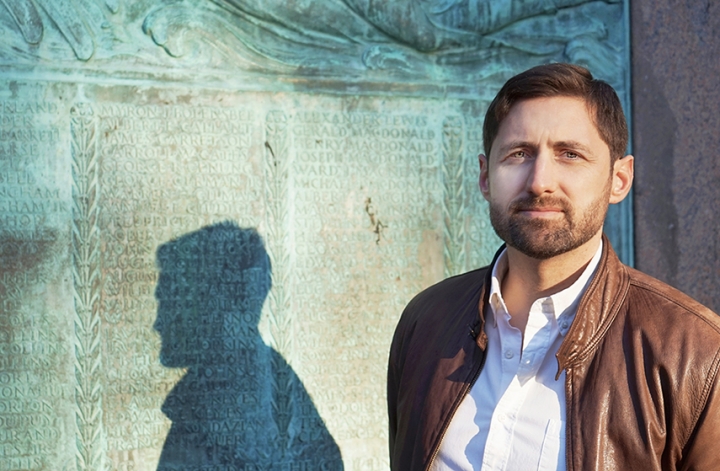 Speaking from his home in Queens, N.Y., novelist Phil Klay ’05—a former Marine and Iraq war veteran who will be in residence (virtually) as a Montgomery Fellow in August—apologizes for the jackhammer racket outside his house. Workers are repairing damage from a fire the day before.

“My street caught fire yesterday—there were flames coming out of the manholes,” Klay says. “That’s 2020, always full of surprises.”

As a Montgomery Fellow, Klay will engage in online public conversations with President Emeritus James Wright, Professor of Classics Roberta Stewart, former Dartmouth trustee and fellow veteran and author Nate Fick ’99, and Dartmouth veterans during the first two weeks of August. (See below for dates and times of Klay’s Montgomery events.)

Despite the global pandemic and the civil unrest around the country, Klay (rhymes with “eye”)—whose debut short story collection, Redeployment, won the 2014 National Book Award, among other recognitions—has reason to be grateful this year: In April, his wife, Jessica Alvarez ’06, gave birth to their new son. And in October, Klay’s first novel, Missionaries, will be published by Penguin Random House.

The book was six years in the making. Set in Colombia, Iraq, Afghanistan, Yemen, and America, it follows four main characters whose stories intersect across global conflicts.

“It’s a novel about how we project violence around the world,” Klay says. “It’s about the globalization of that violence and the after-effects—what happens after we do violence in the middle of a complex conflict.”

Writing as a ‘Truth-Seeking Enterprise’

Klay, who now teaches creative writing at Fairfield University, majored in English at Dartmouth, where he had the opportunity to meet poet, short story writer, and activist Grace Paley when she herself was a Montgomery Fellow in winter 2005.

“She told us something I never forgot about writing. She said, ‘When I revise, I don’t revise to make a story better—I revise to make it more true,’” says Klay.

The lesson? “Fiction writing is a truth-seeking enterprise.”

After Dartmouth, Klay joined the Marines, and was deployed as a public affairs officer in Iraq’s Anbar province, an experience that informs the stories that make up Redeployment. After his service, he earned an MFA in creative writing from Hunter College.

In recent years Klay has published several wide-ranging essays in The New York Times, The Washington Post, The Wall Street Journal, The Atlantic, The New Yorker, and elsewhere on issues related to America’s wars. He calls writing nonfiction “just a different way of exploring a lot of the same questions. Fiction follows a narrative; nonfiction follows an argument.”

But writing fiction allows him “to get at the human heart behind the day’s news,” he says.

“I’ve always thought that fiction is the most rigorous way of looking at a topic. War has become so complicated that it’s really hard to get a hold of. Fiction offers us tools to do that that not a lot of other things do.”

President Wright, a historian and former Marine who has long advocated for veterans nationally and at Dartmouth, calls Klay “one of the best young writers of our time.”

“Phil writes thoughtfully and provocatively in nonfiction as well as fiction,” Wright says. “His work forces us to think about America’s role in the world and those whom we ask to serve on our behalf. ”

Stewart, a scholar of ancient Roman history, is also deeply engaged in veterans’ issues, and has spearheaded the creation of book groups for returned combat veterans to engage with the literature of war, including texts like Homer’s Iliad.

“I am particularly looking forward to the opportunities for Dartmouth undergraduates to engage with Phil Klay’s work, to think carefully with him about America’s imaginings of what veterans are or are supposed to be like, and the personal and social costs of the so-called military-civilian divide,” Stewart says.

Klay will be participating in the following free, online events during his residency. For access links and up-to-date scheduling and other information, visit the Montgomery website or contact Ellen Henderson at ellen.henderson@dartmouth.edu.