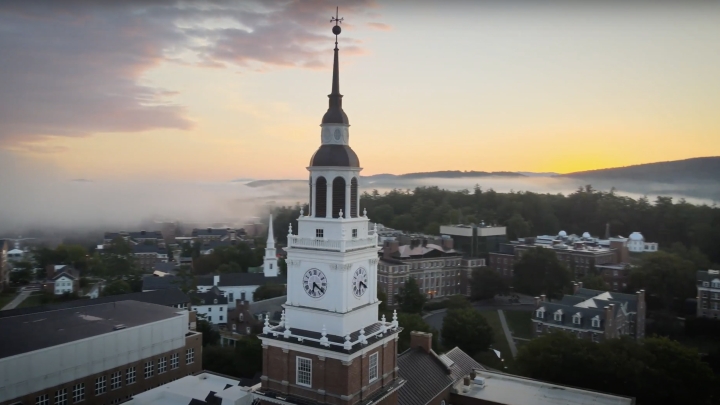 President Philip J. Hanlon ’77 detailed the mandate and membership of Dartmouth’s first-ever Presidential Commission on Financial Aid and announced that the Dartmouth community has pledged $40 million to scholarship support in the four months since his May appeal. He made the announcement during a virtual gathering of parent and alumni campaign leaders on Thursday and Friday.

Dartmouth’s focus on access and affordability—accounting for one-third of The Call to Lead campaign’s $3 billion fundraising target—became even more pressing during the spring months as COVID-19 shut down large portions of the global economy. In response, Dartmouth on May 14 rededicated The Call to Lead, elevating financial aid to the campaign’s most urgent priority.

“Hundreds of Dartmouth families are confronting painful economic hardship due to job losses and businesses closing,” says President Hanlon. “Our commitment to making sure no Dartmouth family must choose between their child’s education and living expenses is unwavering. Despite the economic pressures on the College, we will support our students through these difficult times.”

Due to the pandemic and resulting economic downturn, requests for undergraduate financial aid in the current academic year are expected to grow by $8 million beyond the budgeted amount of $120 million for the current year. The unprecedented one-year increase is up 6% over last year.

The number of the first-year students receiving scholarship support has grown by 2% over last year, while the average financial aid award for the Class of 2024 is up 7%, to more than $60,000, in a year-to-year comparison. Approximately 22% of the current first-year students come from families earning $100,000 or less a year, meaning they’re receiving full-tuition scholarships, up from 20% for the Class of 2023.

Along with the surge in financial aid requests, the College is confronting multiple financial challenges caused by the pandemic, most significantly room and board revenue losses during the spring, summer, and fall terms and extraordinary public health expenses incurred to address COVID-19. Dartmouth took assertive measures to reduce expenditures, including a hiring freeze through December, cancellation of salary merit increases, postponing several campus initiatives, and a series of short- and long-term cost-cutting measures. Members of Hanlon’s senior leadership team have voluntarily given back a portion of their salary to help the institution during the current budgetary challenges. These actions taken by the administration have substantially reduced, but not erased, the projected $83 million operating loss for fiscal year 2021.

To ensure that Dartmouth does not retreat from its commitment to meeting each student’s full demonstrated need, Hanlon unveiled a series of actions in May. He called on the community to rally around access and affordability, asking those who could to support financial aid through endowed scholarships, the Dartmouth College Fund, or the two-year, $16 million Bridge to Recovery Fund to help Dartmouth meet the near-term increased financial aid need of families adversely affected by the pandemic.

Hanlon also established the Presidential Commission on Financial Aid in May to ensure the College could pursue the most talented students, regardless of financial means, and he named the commission’s four co-chairs.

Speaking at the volunteer summit, he outlined the commission’s four-part mandate:

Hanlon announced the commission’s 23 members who are joining the co-chairs. The panel includes leading national experts on educational equity and access, a Dartmouth Board of Trustees chair emeritus, seven members of The Call to Lead Campaign Executive Committee, and numerous civic volunteers and advocates who have worked to expand educational access within the U.S. and internationally.

“Each commissioner brings his or her individual story to this initiative,” says Leslie A. Davis Dahl ’85, one of the four co-chairs. “Several were scholarship recipients who bring engaging perspectives of transformation through a specific community lens. Others have a long-standing dedication to financial aid as the means to supporting diversity in its many dimensions while enhancing academic excellence. In just our first few meetings, their individual voices have planted the seeds for our collective commitment as we undertake this vital initiative to review, analyze, promote, critique, and enhance access and affordability to the Dartmouth experience.”

The commission is working across the community to secure the remaining $1.3 million needed for the Bridge to Recovery Fund before the end of calendar year.

The Call to Lead’s far-reaching financial aid goals continue to be among Hanlon’s highest priorities. They include expanding the income threshold for a full-tuition scholarship from $100,000 to $125,000; eliminating loans from all Dartmouth financial-aid packages; becoming one of only six colleges and universities in the United States to guarantee need-blind admissions to non-U.S. citizens; and ensuring financial aid for foreign study and other off-campus programs.

“I am heartened by our community’s swift, powerful response to the dramatic increase in financial aid need,” says Hanlon. “The future leaders that we’re educating today come from all socioeconomic backgrounds, and financial concerns should never prevent them from participating in all that Dartmouth offers.”

A lot of us feel very strongly about things we see on the news and things we see in the world, and the ability to speak out in a way that feels public, but also safe, is maybe a good thing.