The associate professor is part of a new consortium of Black theater organizations. 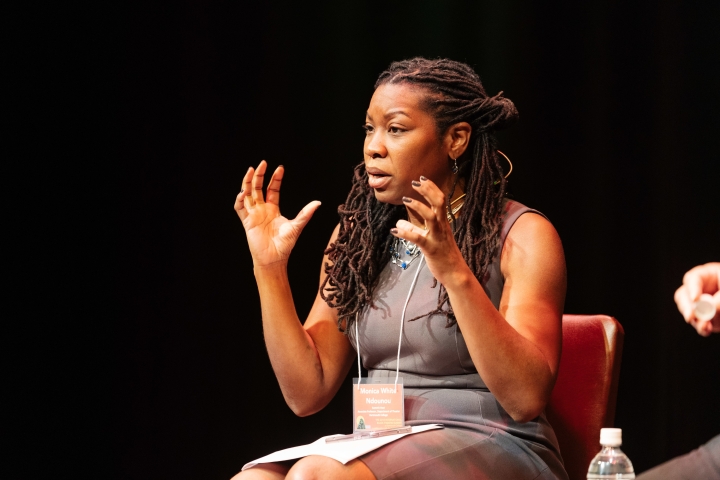 Monica Ndounou, an associate professor of theater and the founding executive director of the Massachusetts-based The CRAFT Institute, has a vision of theater by, for, and about Black people.

“I would love to see a thriving Black theater in every American city and throughout the world—a healthy ecosystem that allows Black people in particular to thrive in their careers as artists, entertainers, and producers,” says Ndounou, who has taught in the Department of Theater since 2017.

That dream is one step closer to fruition with the creation of the Black Seed Initiative—a first-of-its-kind consortium of Black-led theater organizations, spearheaded by Brooklyn’s Billie Holiday Theater and including Ndounou’s CRAFT Institute (which provides workshops, mentorship, and other programming to Black theater artists), Detroit’s Plowshares Theatre Company, and Los Angeles’ WACO Theater Center.

Black Seed recently received $5 million from the Andrew W. Mellon Foundation—“the largest-ever one-time investment in Black theater,” according to The New York Times. The gift will, among other things, allow Black Seed to administer up to 50 grants to Black-led theaters in predominantly Black communities around the country.

The ongoing impact of the summit and CRAFT continues on campus through courses like “The Making of 21st Century Exhibits: Curating a National Black Theatre Museum,” a Dartmouth Center for the Advancement of Learning-funded course designed and taught by Ndounou in Spring 2019 as part of a collaboration with IBTS executive committee member Ekundayo Bandele, founder and CEO of Hattiloo Theatre, who conceived and developed the National Black Theatre Museum project in Memphis, Tenn. (A third summit, originally scheduled for this September, was postponed due to the COVID-19 pandemic but will take place virtually in January 2021.)

“Through the architecture of what has emerged as the Black Seed, we are collectively taking up the mantel of our ancestors and communities. We are part of a continuum of struggle and progress,” Ndounou says.

“We started this process long before COVID, but once COVID hit, we really started thinking about what the impact was going to be on Black theaters particularly, considering the disproportionate impact COVID has had on Black communities—the converging pandemics, really, of COVID and racial injustice.”

The collective nature of Black Seed is an important part of its mission, Ndounou says. “African-based cultural traditions are grounded in community and collectiveness. Even one’s concept of self includes the ancestors, family and community, and the yet unborn. In a western society that constantly tells you you’re by yourself and your life has no value, you can feel powerless, but when we can embrace the roots of our culture and surmount the barriers that try to prevent us from doing so, that’s where our power lies.”

Ndounou says the infrastructure and representation Black Seed will provide for Black theater artists “would have been game-changing” for her own early career as a stage actor and director.

“Part of me feels like I would have accomplished so much more, earlier in my life, if there were certain battles I didn’t have to fight in order to even be in a space that embraced me as an artist. I tell my students, I want you to graduate with your head high, marching out into the world with pride and direction, and going right into the field, if that’s what you want. That doesn’t mean it’s going to be easy all the time, but I would love for the barriers to be removed.”

Ndounou believes the Dartmouth community can work together to eliminate the barriers that exist on campus, outlined in the July 14 open letter from Black faculty, staff and students to senior leadership. She hopes the Black Seed and Black theater in general inspires new pathway for the change.

“To paraphrase (playwright) Lorraine Hansberry, it’s through the specific that we reach the universal. And Black theaters provide that space of cultural specificity—of telling our stories on stage—that allows us to communicate who we are as human beings to the world so the world can see itself in us.”