Former students and colleagues of Dale Eickelman honor his work in Islamic Studies. 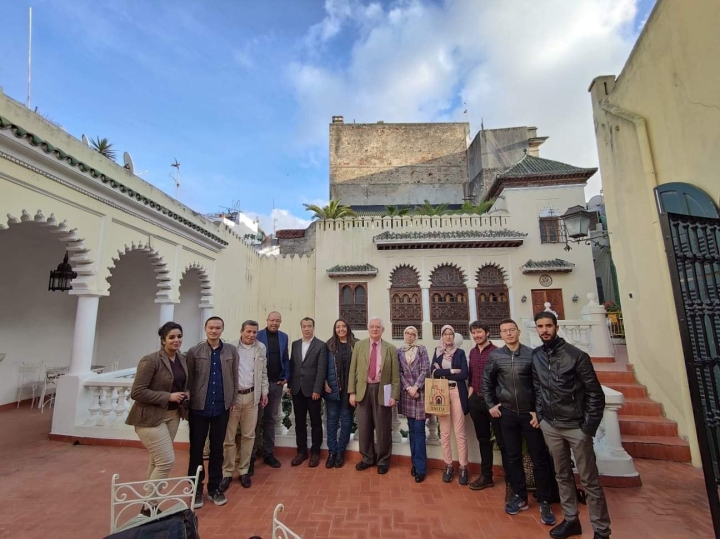 Dale Eickelman, the Ralph and Richard Lazarus Professor of Anthropology and Human Relations emeritus, was recently honored with a collection of essays by former students and colleagues.

Since his retirement in 2016, anthropologist Dale Eickelman ’64 has continued doing familiar work—writing, mentoring students, and leading the Dartmouth College-American University of Kuwait Program and the Tangier American Legation Institute for Moroccan Studies.

But as far as his day-to-day schedule goes, “You never know,” says Eickelman, the Ralph and Richard Lazarus Professor of Anthropology and Human Relations emeritus.

A recent Thursday morning found him taking a call from Morocco. That evening, he would meet online with colleagues from the AUK Program, the Hanover resident said. Then, he’d attend a virtual seminar in the United Kingdom, despite its 10 p.m. start time which was, for him, “pushing the limit.”

In addition to maintaining a far-flung network of friends and colleagues, Eickelman has also been branching out, starting several new projects, including one in China. And, he’s continued to be honored for his work. In October, he received the Middle East Studies Association of North America’s 2020 Jere L. Bacharach award for service.

Last month, Brill Publishers released a Festschrift, or collection of writing that pays tribute to a notable scholar, created for him.

Knowledge, Authority and Change in Islamic Societies, as the book is called,  is a marker of Eickelman’s achievements, which span several disciplines but are “united by his passion for the exploration of knowledge about the Islamic world,” says co-editor Nadav Samin, a visiting scholar at the Catholic University of America, and former Dartmouth lecturer in anthropology and government.

The details were a surprise to Eickelman, who knew that the book was in progress, but had only recently seen the list of contributors.

“I thought they had quite a wide range of people in different circumstances,” he says. “I was, frankly, very happy.”

Each selection relies heavily on Eickelman’s scholarship, and all but one was written with the Festschrift in mind, says co-editor and historian Allen Fromherz ’02.

Eickelman’s many contributions include developing new ways of thinking about the Islamic world, which other scholars have then built upon.

He showed how important it is to “really get down to the local details of a place,” and take close, detailed notice of people’s experiences, says Fromherz, who directs the Middle East Studies Center at Georgia State University. “Dale really challenged the whole field with this idea that we need to allow these societies to speak for themselves, to show that there’s something beyond just these broad categories.”

Throughout his career, Eickelman has written or co-edited more than a dozen books, including Knowledge and Power in Morocco: The Education of a Twentieth-Century Notable, which was published last year. His interest in Islam grew out of conversations with a Dartmouth roommate who was from Sudan, and eventually led him to New York University, where he taught for 18 years, and then back to Dartmouth, where he taught for 27 years. At Dartmouth, he served as chair of the Department of Anthropology and was instrumental in creating a partnership between Dartmouth and the American University of Kuwait, that country’s first private liberal arts university. He also made a point of supporting other academics.

As a doctoral student at Princeton, Samin consulted with Eickelman for his dissertation, which was the foundation for Samin’s prizewinning book, Of Sand and Soil: Genealogy and Tribal Belonging in Saudi Arabia. When he later joined Dartmouth as a lecturer, it was with encouragement from Eickelman.

While Fromherz was at Dartmouth, Eickelman helped him with his honors thesis and was instrumental in encouraging him to apply for a Fulbright scholarship to Morocco.

And as they’ve kept in touch over the years, Fromherz says, he’s realized just how much Eickelman “really enjoys being a mentor and encouraging other scholars at all stages of their careers.”