A Dartmouth study of mathematicians gives a snapshot of the world of math. 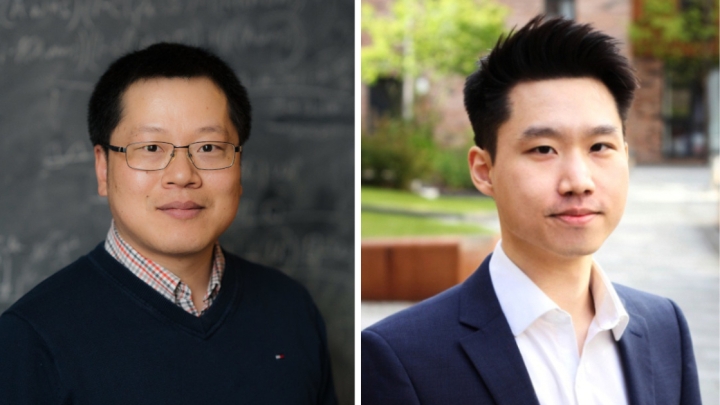 Math’s top prize, the Fields Medal, has succeeded in making mathematics more inclusive, but still rewards elitism, according to a Dartmouth study.

Published in Nature’s Humanities and Social Sciences Communications, the study analyzed the effectiveness of the Fields Medal to make math at its highest level more representative across nations and identities. The result provides a visual, data-driven history of international migration and social networks among math elites, particularly since World War II.

“With so much recent discussion on equality in academia, we came to this study recognizing that math has a reputation of being egalitarian,” says Herbert Chang ’18, a research affiliate in the Fu Lab and lead author of the paper. “Our results provide a complex and rich story about the world of math, especially since the establishment of the Fields Medal.”

The Fields Medal, widely considered the Nobel Prize of mathematics, is awarded every four years to mathematicians under the age of 40. It was first presented in 1936 to honor young mathematicians from groups that were typically underrepresented in top math circles.

According to the mathematicians, the prize has received criticism over its history for rewarding existing power structures rather than making math more inclusive and equitable at the elite level. Against this criticism, the study set out to explore how well the award has lived up to its original promise.

The analysis shows that the Fields Medal has elevated mathematicians of marginalized nationalities, but that the there is also “self-reinforcing behavior,” mostly through mentoring relationships among top mathematicians.

As an example, the study found that the award succeeded in integrating mathematicians from Japan and Germany into the international math community after WWII. But it also found that two-thirds of 60 medalists emerged from the same math “ancestral tree.”

Although the study found diversity among award winners from top math countries, it also found that groups with Arabic, African, and East Asian language identities remain under-represented at the highest level.

The research team defines “elite” as a connection between Fields medalists, rather than other indicators that measure academic productivity and impact.

“It’s a privilege for a young mathematician to inherit a powerful network of relationships from an influential academic adviser,” says Feng Fu, an assistant professor of mathematics and the senior researcher for the study. “The growing number of doctoral degrees awarded to international mathematicians in the U.S. indicates that mathematics can be a powerful integrative force in our common humanity.”

According to the paper, only France exports more elite mathematicians to the United States than it receives from the U.S. “This seems to affirm France as the intellectual capital of mathematics,” say the authors.

Among other findings of the study:

The research team used artificial intelligence techniques to study data on more than 240,000 mathematicians dating as far back as the 16th century. The information was taken from the Mathematics Genealogy database maintained by North Dakota State University.

Researchers organized mathematicians by countries and lingo-ethnic categories and then mapped their flow between nations and across ethnic lines. Connections were drawn to show the physical movement, identity and academic relationship of mathematicians.

“There are many sources of inequality in elite-level math and academia. Our goal was to characterize how a single factor—mentorship—plays a role, while telling a comprehensive story about mathematics,” says Chang, who participated in the Jack Byrne Scholars Program in Math and Society as an undergraduate.

Prior studies of the Fields Medal and elitism in math have focused on how mathematicians cite research. According to the research team, such an approach might miss the structural forces that prevent access to individuals from outside math’s top circles.

The research advances past studies by providing a high-level view of the relationship between mentorship, prize giving, and ethnicity.

The research team concludes, as other researchers have in the past, that the Fields Medal should “return to its roots” in order to achieve its original goal of elevating marginalized voices.

The research was supported by the Shapiro Visitors Program in the Department of Mathematics and the Neukom Institute for Computational Science.