Dartmouth lab upgrades a molecule that is made from sugar and shaped like a doughnut. 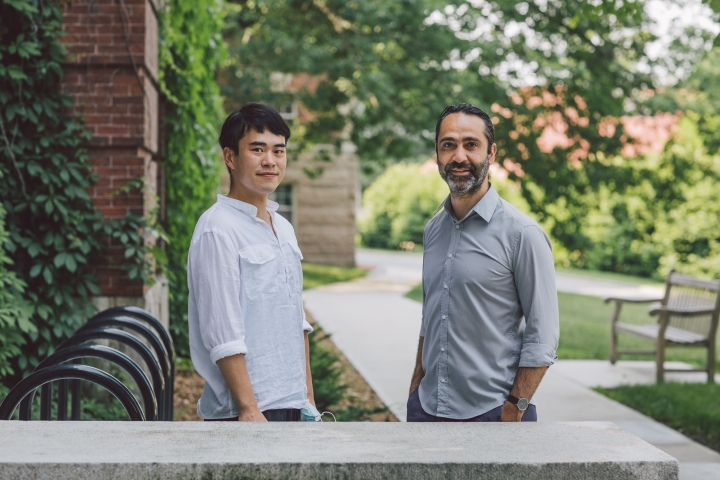 From left, Sirun Yang, Guarini ’22, and Ivan Aprahamian, professor of chemistry, have developed a more efficient and less costly way to produce a chemical—gamma-cyclodextrin—widely used in manufacturing. (Photo by Robert Gill)
6/22/2021
Body

A process using a light-sensitive chemical can drastically reduce cost and energy consumption to produce gamma-cyclodextrin, a compound that is widely used in manufacturing, according to a Dartmouth study.

The research, published in Chem, demonstrates how a hydrazone template can replace energy-intensive distillation to produce and isolate gamma-cyclodextrin—a water-soluble chemical that attracts other molecules and is used to enhance food, pharmaceuticals, and other consumer products.

“These compounds are biodegradable, biocompatible, benign, and commonly used,” says Ivan Aprahamian, a professor of chemistry. “We are making production much more efficient so that they can be even more available to industry.”

Cyclodextrins are naturally occurring compounds that encapsulate and preserve active ingredients in a product until it is used. The compounds are made of glucose and are produced when enzymes are added to starch. Their doughnut-like shape allows them to act as molecular containers that surround other compounds until they are released by heat or other physical processes.

“The unique structure of this molecule helps it hold bulky molecules like vitamins and sensitive dyes,” says Sirun Yang, Guarini ’22, first author of the paper and a member of the Aprahamian Research Group. “Gamma-cyclodextrin was already useful to industry, now we’re making it more accessible for producers of pharmaceuticals, food, and household products.”

In pharmaceuticals, the compound gives medications longer shelf lives and allows them to be formed into easily eaten and digestible forms. Air fresheners use the compound to capture smelly molecules, lowering their concentration in the air. Fragrances use it to slowly release pleasant-smelling compounds.

According to Aprahamian, the challenge for industry is that gamma-cyclodextrin is also energy-intensive and expensive to prepare and isolate. Until now, a costly steam distillation process was required to remove the molecular template that is used to form the compound.

Through the use of a template made from light-sensitive hydrazone, the new process guides gamma-cyclodextrin into its distinctive container-like doughnut shape during its enzymatic production, but can then be removed using a cost-effective and environmentally friendly photoirradiation process.

“Our method relies on using hydrazone, which is a photoswitch that can be easily added into the gamma-cyclodextrin cavity,” says Aprahamian. “Once you introduce light, it changes shape and leaves the cavity, facilitating the isolation of the compound. There is no more need for steam distillation.”

According to the research team, with cheaper production costs, gamma-cyclodextrin could become more available for use in a wide range of consumer products. For pharmaceuticals, increased use of the compound would allow manufacturers to formulate lower dosages of active ingredients, making medication less expensive and reducing side effects.

Maria Pellegrini, a research professor, and Dale Mierke, a professor of chemistry, also contributed to the study.