Firing Up the Distant Past, With a Handmade Kiln

Throughout the fall, a group of students met in Dartmouth Library’s Rauner Special Collections Library to decipher handwritten texts from the Middle Ages.

The class—“Latin Paleography,” co-taught by Jennifer Lynn, language program director in the Department of Classics, and medievalist Cecilia Gaposchkin, a professor and chair of the Department of History—was a one-of-a-kind opportunity for undergraduates interested in Latin, medieval studies, and the history of books.

“It is amazing that we have 10 students who want to learn this,” she says. “They’re doing graduate-level work.”

Textspeak for the Middle Ages

Before the printing press, European scribes wrote and copied manuscripts with quill and ink, in Latin. Today, making sense of these works requires knowledge of everything from calligraphic styles to idiomatic Latin expressions and abbreviations—think textspeak for the Middle Ages.

In manuscript shorthand, “DNO means domino (lord), DS is deus (god),” says Salame, who plans a modified government major. “A u with a line over it equals the letters um—they just didn’t want to fit the last character in at the end, the way we would write ‘tho’ instead of ‘though.’ ”

“It’s like solving a puzzle,” says Elizabeth Hadley ’23, a member of School House from North Caldwell, N.J., who calls the class “one of the best experiences I’ve had at Dartmouth.”

It is amazing that we have 10 students who want to learn this. They’re really doing graduate-level work.

A premed classics major, Hadley says it’s “fun to put the pieces together to figure out the words. And then just seeing the manuscripts themselves. These are artifacts that you never would think that you’d be able to see.”

Paleography is an essential part of classical and medieval scholarship, Lynn says. “Even if you’re reading classical texts that come in a printed book—Cicero or Virgil, say—some editor looked at all the manuscripts we have and had to decide which one is right. You have to be able to assess the work of the editor, even if most of your reading is from books.”

Manuscripts can help reveal details of the specific time and culture in which they were written, Gaposchkin says. “Any scholar worth his or her salt invariably ends up having to contend with the material record of what our knowledge is based on. Often the only way to date and place a piece of evidence is through the writing. It’s a basic technical skill for doing provenance work.” 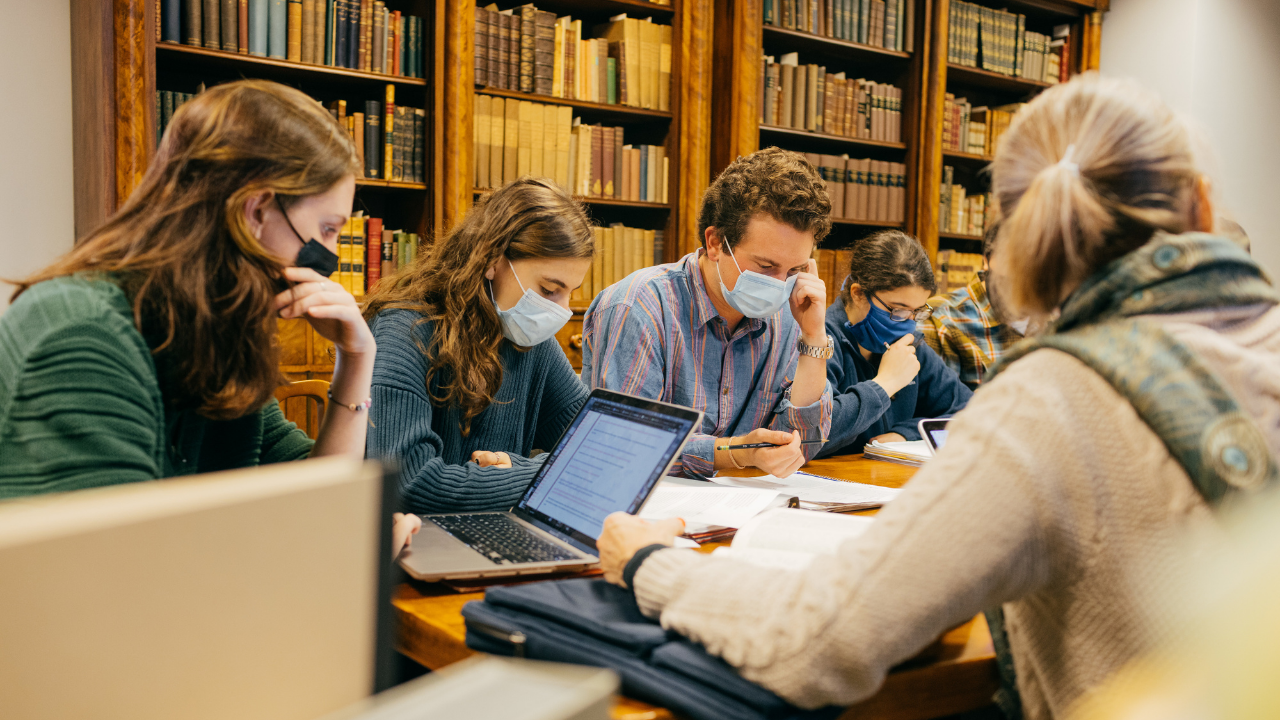 In a typical session, the students gather in Rauner’s Ticknor Room with a manuscript open on table, the page under discussion projected on a screen and a library cart of reference books nearby. The students have transcribed and translated the text in advance, and they go around the circle sharing interpretations. The professors weigh in with pieces of historical and linguistic context.

“It’s a fundamentally collaborative discipline,” Salame says. “You need multiple pairs of eyes on a manuscript in order for someone to see something that perhaps you can’t see in the moment.”

The students learn about manuscript conservation from Dartmouth Library’s collections conservator, Deborah Howe; codicology, or the study of books as physical objects, from special collections librarian Morgan Swan; and visit the Book Arts Workshop, where Program Manager Sarah Smith shows them how to make oak gall ink and quill pens and lets them practice writing their own Gothic calligraphy.

“It’s hard, but fun to put yourself in the scribe’s position—in the shoes of the person writing the stuff that we’re reading for homework,” says Hadley.

For their final projects, the students document manuscript fragments from Rauner’s collection—artifacts that no one may have looked at closely for hundreds of years.

“I’m looking at a martyrology from the 11th century on Saints Palatias and Laurentia,” says Salame. “It’s a fragment of a folio that was torn out of its original manuscript and repurposed as part of a binding for another manuscript. There are scribal notes in the margins and superimposed text in another hand from a later period. On some of the edges, the text cuts off and I have to figure out what the words are.”

“Rauner has a lot of fragments that have very minimal metadata,” Gaposchkin says. “The students have to basically do the work of a librarian or historian.”