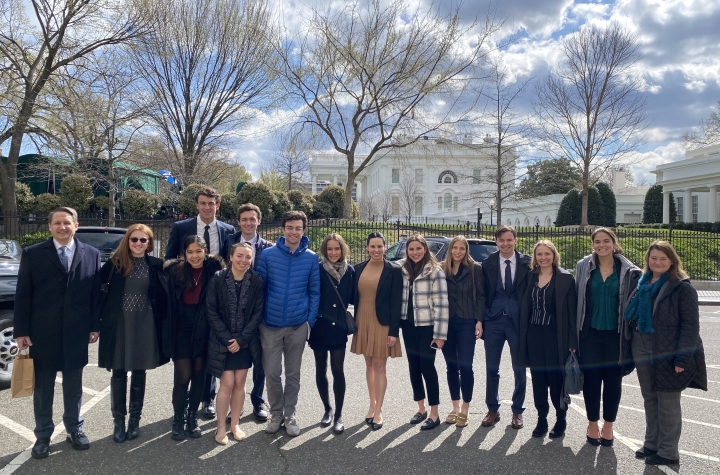 The War and Peace Fellows get a photo with National Security Council policy advisor Alea Nadeem, center in tan, after touring the Eisenhower Executive Office Building and meeting with Cara Abercrombie ’97 at the White House last week. (Photo by Thomas Candon)
4/06/2022
More Reading

Students Get a Firsthand View of Foreign Policy Work in Qatar

When the War and Peace Fellows traveled to Washington last week, they weren’t expecting their encounter with power would be spelled with a capital P.

But after a visit with Isobel Coleman, a deputy administrator at the U.S. Agency for International Development and a Dartmouth parent, a few of the students from the Dickey Center program asked if USAID Administrator Samantha Power was in the building. An assistant told the group to stay put in the conference room for a few minutes. 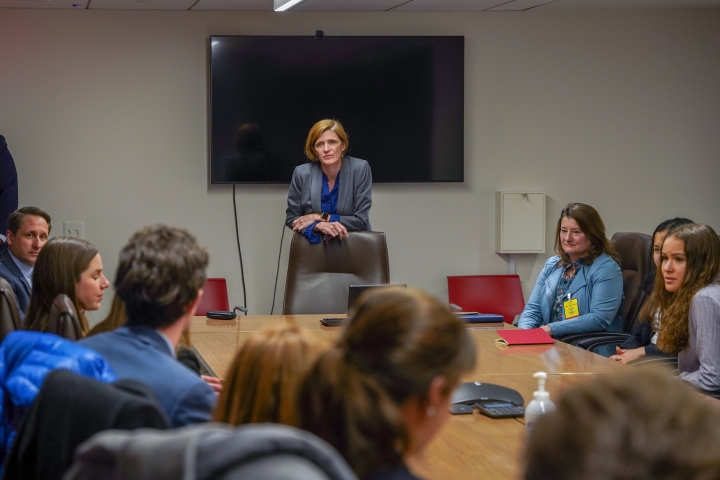 A short time later Power, the Pulitzer-Prize winning author of “A Problem from Hell:” America and the Age of Genocide and former U.S. ambassador to the United Nations, walked in.

“Samantha Power is my role model in the human rights world. I read her memoir,” says Chantal Elias ’22, who quotes Power’s work on genocide prominently in her senior thesis, which examines the connection between public opinion and U.S. humanitarian interventions in global conflicts.

“She’s probably one of the busiest women in Washington right now, but she ended up popping by and talking with us for probably 15 minutes—and three of us got to ask her questions, which was an absolute surreal experience,” says Elias, a government major with a minor in earth sciences.

“She was very candid about Ukraine. She had just gotten back from being with (President Joe) Biden in Poland. She introduced Biden in Poland just days before, so it was absolutely incredible.”

The War and Peace Fellows program is a co-curricular Dickey Center program that gives undergraduates interested in public service and government careers access to high-level policymakers working in Congress, the Pentagon, the State Department, NGOs and the intelligence community, and to internationally renowned experts on war and peace through visits, conferences, and travel to Washington and around the globe.

During the two-day trip on March 28 and 29, the group met with policy leaders and experts from the National Security Council at the White House, The Washington Post, Freedom House, the World Bank, Catholic University, the U.S. Russia Foundation, the Senate Appropriations Committee, the U.S. Agency for International Development, and Refugees International.

Many of the people who met with the Dartmouth group, including Power, were colleagues of Holt from her time with the State Department, the United Nations, and public policy institutions involved with international security and civilian protection in conflict. Many of the participants were also Dartmouth graduates.

“The students were great: insightful and curious,” says Holt. “They asked very senior leaders from the White House to Refugees International questions about policy and choices. And all the speakers told them—start with what interests you and you will find your way to working on issues of war and peace from there. The world needs their talents.”

This year’s group was predominantly seniors, who have missed out on the annual spring trip to Washington since sophomore year when the COVID-19 pandemic shut travel down, says Valentino.

“It really was a kind of rite of passage for War and Peace students in the past, but the last three years we haven’t had that. So it was great to see them have that opportunity, and they really bonded in a short time,” Valentino says.

“As we all discovered, there is a real difference between meeting someone on Zoom and being there in their office, going through security into buildings like the White House and the World Bank, and having a sense of what it’s actually like. I could feel it, and I know all the students felt it too.”

In addition to meeting so many extraordinary leaders, Elias says experiences like having dinner with recent alumni and talking about the struggles and excitement at the start of their careers, spotting U.S. senators walking the halls of the Capitol, or getting a chance to see parts of the White House that few people ever see, including Vice President Kamala Harris’ office, were invaluable.

“Our tour of the Eisenhower Executive Office Building, which is at the White House, was by this amazing woman, Alea Nadeem. She was our tour guide but also is the right-hand woman of Cara Abercrombie ’97, who is a special assistant to the president on the National Security Council,” Elias says.

“She brought us around the building, and we were walking by the Truman bowling alley and she said, ‘Oh, I haven’t been in,’ so we went down there and there were pictures of Nixon bowling. We also saw Kamala’s office, and these beautiful libraries, things like that. It was pretty cool. And then we met with Cara Abercrombie.”

Valentino says the students are always amazed at how generous the leaders they visit are with their time.

“The thing you come away with from these trips is that, although we’re meeting with some of the busiest, most important people in our country, they really enjoy giving back to young people who are thinking about careers in public service,” Valentino says.

“It’s gratifying for me to see, and I always remind the students at the end of the trip that, hopefully one day the tables will be turned, and future Dartmouth students will be knocking at their door, and they’ll pay it forward.” 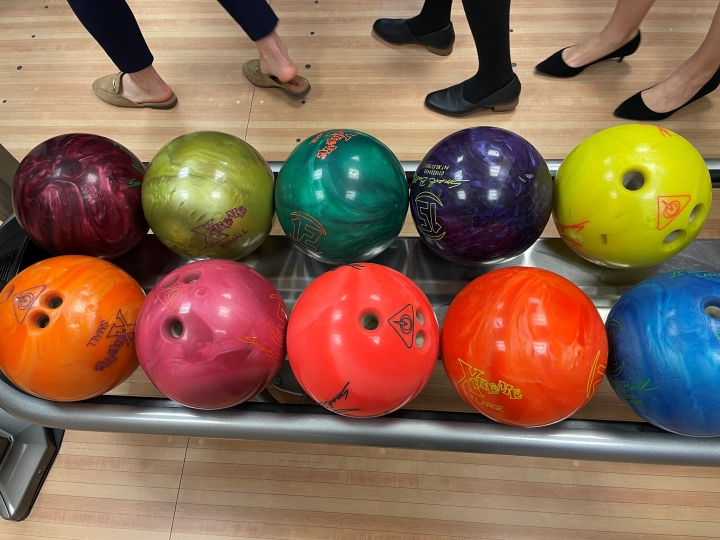 The group visited the Truman bowling alley in the White House complex and also got a peek into Vice President Kamala Harris’ office before meeting with Abercrombie. (Photo by Victoria K. Holt)
Written by
Bill Platt
Share this
FacebookTwitterEmail
In the News