Dartmouth officials say they are committed to the project, and also to public input. 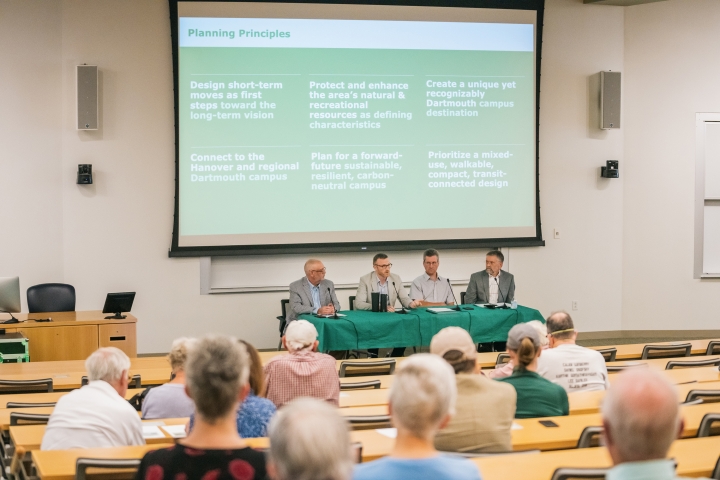 Dartmouth officials hosted the first of five community meetings last night to discuss the plan to build apartment-style undergraduate housing on Lyme Road at the North End of campus. About 150 people attended the session.

Those at the hybrid meeting—held in the Class of 1978 Life Sciences Center and on Zoom—asked questions and expressed strong opinions for and against different elements of the project, including the change of location, design, transportation, lighting, access to open space, and energy sustainability.

“We will do our best to be good neighbors as we proceed with something that we think we need for our students and for the College,” said Executive Vice President Rick Mills.

Provost David Kotz ’86 told the meeting participants that Dartmouth is “really committed to hearing from students, faculty, and the community about the design of these buildings so we make sure that we can design them in a way that’s attractive and functional and a nice place to live and a nice place to be a neighbor.”

Dartmouth plans to build three apartment-style buildings that will initially house about 400 undergraduates, before transitioning to graduate housing after about a dozen years. The project will include common areas indoors and out, a fitness facility, and a design that enhances access to the nearby 90-acre Pine Park forest. The location, 1.4 miles from the Green, would be a five-minute shuttle ride to the center of campus.

It creates kind of a natural extension of the existing Dartmouth campus.

A plan unveiled last October, which met opposition from neighbors and others, had the buildings located on the east side of Lyme Road adjacent to Garipay Field. In response to community input, the plan was updated in June and moved to the west side of the road, just south of Hanover police and fire headquarters.

“We heard loud and clear from all of you that Garipay Field was not the site for this project,” Mills said. The new location “is consistent with our master planning vision for the future. It is where the trustees and the president have settled, and it is where we are going to move ahead with permitting.”

He said that the “core part of the campus doesn’t have the space that would allow us to build this sort of apartment-style living. It inherently requires more space.”

Dartmouth will need site plan approval from the Hanover Planning Board, and a special exception from the Hanover Zoning Board of Adjustment, to build a residential facility in the institutional zone. Dartmouth expects to file applications with the town later this summer.

Dartmouth’s 2021 strategic master plan, Planning for Possibilities (PDF), describes the former Hanover Country Club golf course property along Lyme Road as a site for future academic and administrative building and student housing. It also calls for preservation of open space and recreational uses. As part of longer-range plans for the North End of campus, the undergraduate apartments are expected to eventually become graduate and professional school student housing.

A view of the apartment-style student residences, seen from the first roundabout on Lyme Road north of downtown Hanover.

In addition to adding much-needed student housing and offering a different type of accommodation, construction of the apartments will offer Dartmouth the flexibility it doesn’t now have to house students while renovating existing undergraduate housing, which it plans to do over the next 12 to 15 years. There is no extra available space to house students while an existing residence hall is off-line for a year of extensive renewal and renovation.

Kotz said that he moved his daughter, a member of the Class of 2022, into Brown Hall in the Choates housing cluster four years ago, the same building he lived in as a first-year student. “And it hadn’t changed much in the intervening 36 years,” said Kotz. “That is why this project, and this series of projects, is so exciting. … Some of these dorms haven’t been renewed in 40 to 50 years, and they’re pretty tired.”

Officials welcomed the input last night, some of it critical, and said the four future community sessions will be geared to discussion of specific topics—building design and materials; programming and the student experience; green and public spaces; and transportation, the environment, and sustainability. (See schedule)

“There is still plenty of opportunity to weigh in on the future direction of the project,” said Joe Shivell, vice president of architecture and engineering at Michaels Student Living, Dartmouth’s partner on the project.

Viva Hardigg ’84 suggested open land near the project be protected to keep some green spaces from development.

Hanover resident Deb Nelson said the building “design features (are) very impressive,” but suggested building on West Wheelock Street, closer to the center of campus, so student wouldn’t have to take a shuttle to class and dining halls.

Kristan Schiele, who lives in Dartmouth housing south of campus in Sachem Village, said her neighborhood has a strong sense of community. Residents there commute to campus, and that’s not been a problem, she said. She said the North End project would be appreciated by older undergraduates and eventually by graduate students.

Resident Barry Harwick ’77, who lives near the Lyme Road site, said the size of the project is too large for the location. “It’s simply the wrong site for a dorm.”

To residents unhappy with the North End location, Vice President of Campus Services and Institutional Projects Josh Keniston said Dartmouth looked at nearly a dozen potential sites—including West Wheelock Street—and none were large enough to house 400 students in apartment-style housing. He said they also looked at locations elsewhere on the former golf course property and decided it would be isolating to add a building in the middle of that land.

“I can see in the room there’s lots of head-shaking and that it’s not the decision that folks would have made, but from a planning perspective, as we’ve looked at the long-term use of our land, we really feel like it’s the right move to create that kind of sense of place, that sense of density, where we can create a cluster of students living together,” he said, adding that the strategic plan anticipated that the Lyme Road land would also be the location of future academic growth.

“As we started to think about moving housing to this side of Lyme Road, we wanted to make sure that in doing so, we were being thoughtful about future academic development and that this could ultimately be a future node of the campus, whether there are office spaces or classroom spaces,” he said. “It creates kind of a natural extension of the existing Dartmouth campus.”

Some, like Jessica Chiriboga ’24, were in favor of the project. She said students like the Summit on Juniper apartment complex Dartmouth opened in March on Mt. Support Road in Lebanon. She said residents there use Advance Transit to get to campus rather than drive their cars, and she suggested supplying bicycles for residents of the North End project. She also suggested creating a meditation garden or wellness center on the Lyme Road site, and said the project is a timely opportunity to address physical accessibility requirements that are not being met in some residence halls.

“We need to fix our housing problem on this campus,” she said.

Student Michael Minieri ’25 sent a comment during the meeting saying he supports the new construction. “We really have no safety or confidence in our current buildings,” he said. “The lack of beds for students also forces us off campus, which results in us living in poorly maintained houses at exorbitant costs. I appreciate this plan and would love to see this.”

Learn more about the North End project and submit comments and questions about the development to dartmouth.north.end@dartmouth.edu. To be put on the mailing list for updates about the project, send a request to campus.planning@dartmouth.edu.