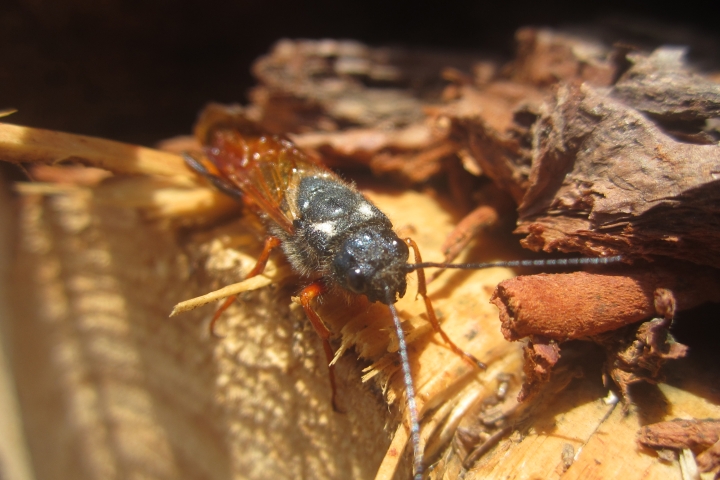 Lindgren funnel traps are made by connecting enough household funnels to form a long tube. The contraptions are suspended to mimic trees. Drops of ethanol or turpentine can be placed at the bottom to attract insects for research.

In 2004, a single female Sirex woodwasp was identified in a funnel trap in Fulton, N.Y. The woodwasp is native to Europe, Asia and North Africa. It was not supposed to be on a pine tree in upstate New York.

“Nonnative species arrive from distant lands all of the time,” says Matthew Ayres, professor of biological sciences. “This wasp most likely migrated to the U.S. from Europe inside wood packaging material used in shipping at a cargo port.”

These wasps are cool, and a bit different than wasps many of us are familiar with. They don’t sting people, they sting trees.

Unlike yellow jackets and other common wasps, Sirex noctilio eats wood rather than fruit and meat. The insect injects a fungus and a dose of venom into trees to weaken and even kill them. They also place their eggs in the trees, where the larvae hatch and feed on wood that is digested by the fungi.

“These wasps are cool, and a bit different than wasps many of us are familiar with,” says Flora Krivak-Tetley ’02, Guarini ’19, a postdoctoral researcher in the Ayres Lab. “They don’t sting people, they sting trees.”

Since first being introduced in North America, the Sirex woodwasp has migrated throughout the northeastern United States and parts of Quebec and Ontario in Canada. The New York State Department of Environmental Conservation identifies the Sirex woodwasp as one of the top 10 most serious forest pest invaders worldwide.

In its native range, it is considered little more than a minor scavenger of dying trees, but in the Southern Hemisphere where pines are not native, the invasive has already been responsible for major attacks against pine tree plantations. 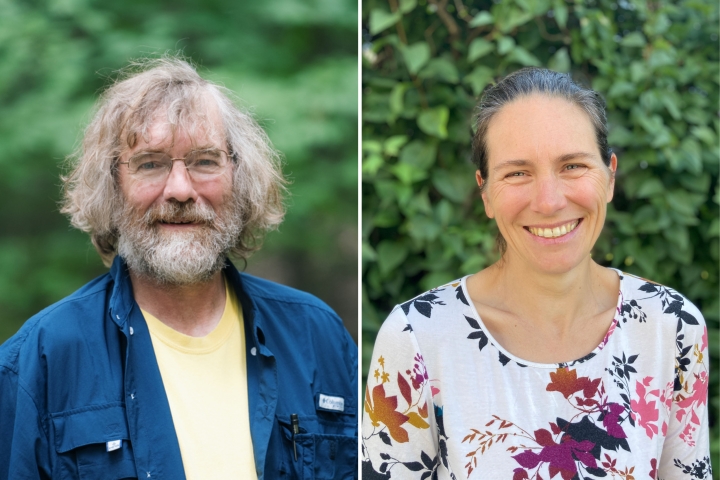 A recent study on Sirex noctilio from Krivak-Tetley and Ayres estimates that the species has the potential to reproduce at rates two- to three-times higher in North America than in its native territory. Published in NeoBiota, the study also found that while the Sirex woodwasp has the potential to be over 150% more productive in the northeastern U.S., conditions including the scarcity of host pine trees, tree defenses and the existence of natural enemies have held the line so far.

“When we first observed the Sirex woodwasp in North America, we said, ‘Oh, no, we better brace ourselves for this,’” says Krivak-Tetley, who credits Lars Olaf-Hoeger ’14, with providing major contributions to the research. “We are not sure how it will go in other parts of the continent but, for the moment, nature has rallied to its own defense against this woodwasp.”

According to the research team, the story could change in the “wood basket” states of the southern U.S. that contain large expanses of valuable, fast-growing pine forests. This includes a vast area of forests ranging from North Carolina to East Texas. The American West, with pines already at risk from drought, fire and naturally low defenses, could also be susceptible to the invasive species.

“This wasp will continue to spread throughout North America and can be expected to eventually show up everywhere there are pine trees,” says Ayres. “The good fortune we’ve enjoyed so far with the Sirex woodwasp could change if the insect reaches areas with higher resource availability and fewer natural enemies.”

While nonnative species can be hard to control, the Dartmouth research on the Sirex woodwasp demonstrates how local ecosystems can use their biological defenses to resist attack from non-native species, even if only temporarily. Other research from the Ayres Lab demonstrates how another notorious forest pest responds to environmental change.

The Dartmouth lab has studied the southern pine beetle since 1993. In the United States, the bark beetle is native to the Southeast but is spreading northward with warming temperatures to threaten pine trees in new ranges. 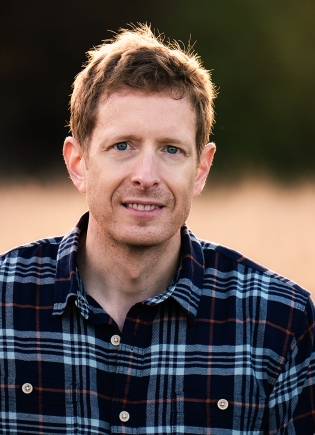 With the northward expansion of the beetle already subject to widespread studies, a paper authored by the Ayres Lab’s Jeffrey Lombardo, Guarini ’17, examined if temperatures in southern U.S. forests had warmed beyond the biological limits of the southern pine beetle to survive. The study also assessed if warming has resulted in a decline in its population in the South.

The research, published in Agricultural and Forest Meteorology, indicates the southern pine beetle has not encountered temperature-related restrictions on its southern distribution, in part because higher temperatures in the South are being felt as warmer winters rather than more extensive heatwaves.

“This has important consequences for how species may be influenced by climate change,” says Lombardo, now an assistant professor of biological sciences at Hood College. “Any insect that has similar physiological and life-history characteristics to the southern pine beetle may also be impacted by the pattern of environmental change in eastern North America.”

The economic cost of invasive species worldwide in the past half-century is estimated to be over $1.25 trillion. The Ayres Lab, which studies the ecology of insects and seeks to understand the forces that lead to dramatic population fluctuations, stands at the center of research efforts to understand the behavior and movement of nonnative species.

“Understanding why tree-eating insects are destructive in some places and not in others gives us the tools to respond to them quickly,” says Krivak-Tetley.