The Ritual of Breath Is the Rite to Resist responds to police violence. 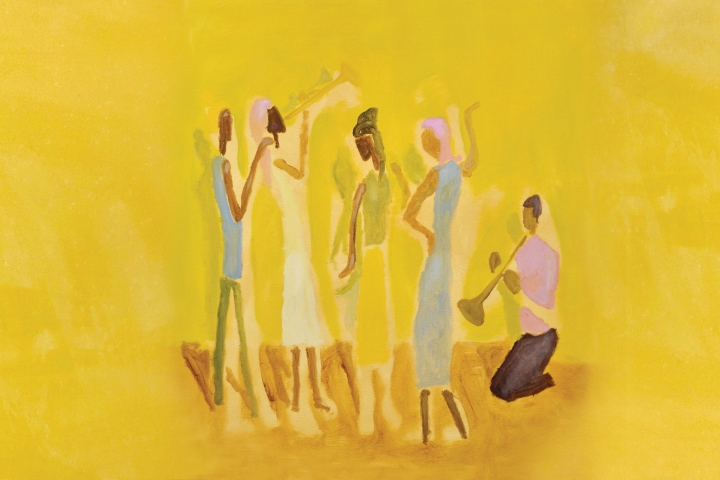 An infamous police killing of a Black man on a New York City sidewalk has given rise to a multidisciplinary opera premiering Sept. 16 and 17 at the Hopkins Center for the Arts.

The Ritual of Breath Is the Rite to Resist recalls the 2014 death of Eric Garner after a police officer placed him in a prohibited chokehold while attempting to arrest him for allegedly selling loose, untaxed cigarettes.

The seven-movement piece, a requiem inviting meditation, began as a collaboration between Enrico Riley ’95, the George Frederick Jewett Professor of Studio Art, and Jonathan Berger, the Denning Family Provostial Professor in Music at Stanford University. Both 2016 Rome Prize winners who met while working and studying at the American Academy in Rome, their mixed-media project has taken shape during a tumultuous time, marred by police brutality and racial unrest.

Over the past six years, the Hop invited other creators to interweave text, music, voice, visuals, and dance, culminating in what Mary Lou Aleskie, the Hop’s Howard Gilman ’44 Executive Director, calls one of the most ambitious projects she’s ever helped to produce.

It will also be the subject of this year’s Shared Academic Experience, which introduces first-year students to the broader intellectual community.

The work’s title is inspired by the words Garner repeated—“I can’t breathe”—after police officer Daniel Pantaleo put him in the lethal chokehold and wrestled him to the ground.

“Many years in the making, reverberating against the theft of Black breath by police, The Ritual of Breath Is the Rite to Resist is a powerful requiem as imagined through Garner’s daughter, Erica,” says Aleskie.

“They’ve held candid and moving conversations among the artists, mothers who have lost their children to state-sanctioned violence, Dartmouth students, and members of our local community affected by the crisis,” Aleskie says. “For all of us, it’s been an immersive, deeply emotive experience, and that’s also what we are offering.”

Many Hands, Many Talents

Erica Garner, who was spurred to activism by her father’s death, died in 2017 following a heart attack. She’s portrayed by Canadian-born soprano Neema Bickersteth, who is also the show’s co-choreographer.

“It’s important for people of color to be with each other, to support and learn from each other, separately from others,” says Bickersteth. “And it’s important for allies to also join the circle of healing. As long as there’s curiosity, there’s space for dialogue and healing. The goal is for the healing to spread through ever-growing circles.”

Poet and Associate Professor of English and Creative Writing Vievee Francis, author of Forest Primeval (2016) and winner of the Kingsley Tufts Poetry Award for Horse in the Dark (2012), wrote the libretto. Its chiseled lines raise chilling questions:

Niegel Smith ’02, artistic director of The Flea, a leading off-off Broadway theater known for innovative programming, directs the opera. For Smith, the threat of police brutality hits close to home.

“You know, I have a nephew, I have brothers, I have two nieces, and I think about how treacherous it might be for them to be out in the world. How can one feel liberated or free to pursue life?” he asks. “We are special people. We know our communities uplift us and remind us, and we carry that with us. But until we all do the work, it’s a big concern.”

Riley expresses that concern, as well, with his pre-Rome Prize paintings, in which faceless Black arms and legs are bound by ropes or threatened by guns. 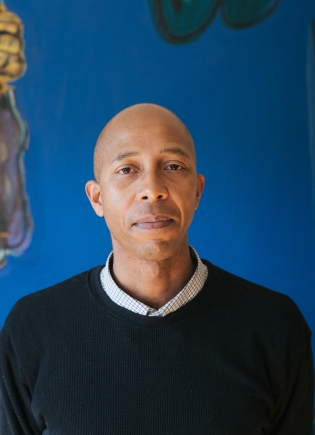 Enrico Riley ’95, the George Frederick Jewett Professor of Studio Art, is one of the creators of the work. (Photo by Robert Gill)

“There can be escalation and crisis in interactions with power, if you are a person of color,” says Riley. “The issue is extremely complicated, and I don’t want to oversimplify it, but from my own point of view, what is disturbing is that a situation can move from zero to 60 extremely quickly.”

Riley says his work has evolved considerably since he began collaborating with composer Berger and Peter Nigrini ’93, an Obie-award winning-scenic and projection designer who has animated some of his imagery for the Hop production.

“This is so fluid, this creative process, it’s almost like breathing itself,” says Riley. “Somebody breathes in and somebody else breathes out.”

The opera leverages live multimedia elements integrated into the scenic design. The video components bring to bear the power of live video and social media in capturing police violence and organizing communities of resistance.

The world premiere is also ideally timed as the topic for Dartmouth’s annual Shared Academic Experience.

Riley, Berger, Francis, Smith, and Nigrini will hold a panel discussion for the new students on Sept. 2, and repeated on Sept. 6, about the creation, development, and production of the opera, and tickets will be provided to new students who wish to attend a performance.

“The genesis of The Ritual of Breath illuminates the power of the liberal arts to enable our engagement in difficult conversations,” says Elizabeth Smith, dean of the Faculty of Arts and Sciences. “Over the course of students’ Dartmouth experience, we seek to empower them with the open-mindedness and resilience needed to engage with challenging dialogue—essential tools that will enable them to help create a more equitable and inclusive world.”

The public is also invited to share in “communal acts of healing and reflection” during six days of digital and in-person rituals before the opera opens at the Hop.

The Ritual of Breath Is the Rite to Resist will be presented in the Hop’s Spaulding Auditorium at 7:30 p.m. Sept. 16 and 17. Tickets can be purchased through the Hop’s website, which also has more information about the cast and crew.

Description
Half American: The Epic Story of African Americans Fighting World War II at Home and Abroad by history professor Matthew Delmont and Night of the Living Rez by Morgan Talty ’16 are listed as among the notable books of the year.
New York Times
Articles

A Q&A With Alexander Chee 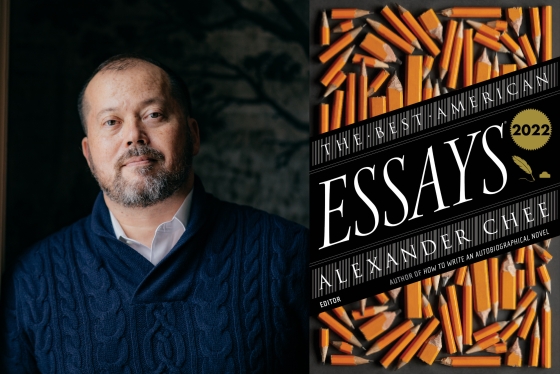