Assistant Professor of Anthropology Maron Greenleaf and Research Associate in Anthropology Sarah Kelly, a postdoctoral researcher affiliated with the Arthur L. Irving Institute for Energy and Society, are the 2022 winners of the Apgar Award for Innovation in Teaching.

Presented by the Dartmouth Center for the Advancement of Learning, the Apgar Award recognizes and supports innovative teaching initiatives that cross traditional academic boundaries. Greenleaf and Kelly were honored this year for their course “Environmental Justice,” which draws on methodologies from anthropology, sociolegal studies, and human geography to explore how environmental harms are experienced across different communities.

The Apgar Award at Dartmouth is the latest in the Awards for Excellence program that was begun by Sandy and Anne Apgar in 1982 and is presented annually at 15 leading educational and cultural institutions and professional organizations. The award is aimed at team-taught, interdisciplinary courses, particularly those offered by faculty at an early stage of their careers and particularly faculty in the Arts and Humanities. The endowment for this prize provides a modest cash prize to each of the faculty teaching the course selected for the award.

Colin Calloway, the John Kimball, Jr. 1943 Professor of History and professor of Native American studies received the 2022 Sarah Josepha Hale award from the Richards Free Library at a ceremony at the Newport, N.H., Opera House on Saturday.

The Hale award judges cited more than a dozen of Calloway’s books, including his most recent, The Chiefs Now in This City: Indians and the Urban Frontier in Early America, published in 2021, and 2018 National Book Award finalist, The Indian World of George Washington.

For over 60 years, the Sarah Josepha Hale Award has been given by the trustees of the Richards Free Library, in Newport, N.H., in recognition of a distinguished body of written work in the field of literature and letters. The award honors author, poet, and essayist Sarah Josepha Hale, who as editor of Godey’s Lady’s Magazine, shaped the opinion of 19th century American women. The list of Hale Award winners includes dozens of prominent writers including Robert Frost, Ogden Nash, David McCullough, and Sy Montgomery.

This fall, Assistant Professor of Physics and Astronomy Burçin Mutlu-Pakdil can be seen as a life-size 3D-printed statue at the Dallas Arboretum and Botanical Garden as part of “#IfThenSheCan—The Exhibit,” a collection of 120 statues of leading women in science, technology, engineering, and math.

Following an enthusiastic reception last year at the National Mall in Washington, D.C., 50 statues from the collection have “popped up” at the Dallas Arboretum and Botanical Garden. The outdoor exhibition runs from Sept. 9 through Dec. 31. 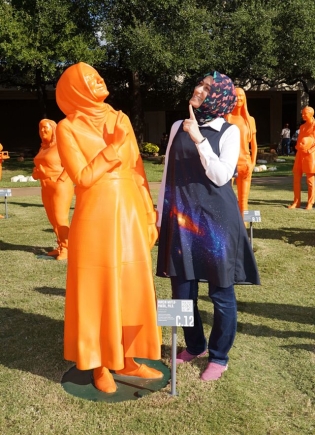 Assistant Professor of Physics and Astronomy Burçin Mutlu-Pakdil alongside the 3D-printed statue created of her as part of “#IfThenSheCan—The Exhibit.” (Photo courtesy of Lyda Hill Philanthropies)

The exhibit is part of an initiative spearheaded by Lyda Hill Philanthropies to activate a “culture shift” among young girls to open their eyes to STEM careers. Each statue features a QR code that visitors can scan with their phones to learn more about the respective innovator.

“I didn’t have any role models when I was a kid,” says Mutlu-Pakdil, who grew up in Turkey before attending graduate school in the United States. “Throughout my academic career, I was told numerous times that I had no place in STEM.”

Adrienne Shibles, the head coach of women’s basketball, was named a member of the Maine Basketball Hall of Fame Class of 2022, one of 14 inductees this year.

The nomination letter for Shibles noted she has over 400 college coaching wins and was the 2019 WBCA Division III Coach of the Year. She is the winningest coach in Bowdoin College women’s basketball history, and is entering her second season as head coach of Dartmouth women’s basketball. As a player, Shibles scored more than 1,000 points at Bates College.

Pellegrini says his greatest professional passion is for “resident and medical student education, and he has been responsible for the education of more than 100 orthopaedic residents and 20 resident research fellows.”

Alex Joel ’25 was named a 2022 National Defense Fellow by the Alexander Hamilton Society, a national organization that seeks to identify, educate, and launch young men and women into foreign policy and national security careers.

As a fellow Joel, a government major with a minor in Russian area studies who is also a research assistant with Dartmouth’s Initiative for Global Security, will take part in the Peace Through Strength Boot Camp in Washington and the Reagan National Defense Forum in Simi Valley, Calif.

The Alexander Hamilton Society press release hailed the 20 fellows in the 2022 cohort. “These student leaders each stood out for their accomplishments on and off campus, as well as their passion for national security and dedication to public service.”

Kudos is an occasional column that recognizes Dartmouth faculty, students, and staff who have received awards or other honors. Did you or a colleague recently receive an award or honor?

Please tell us about it: dartmouth.news@dartmouth.edu.